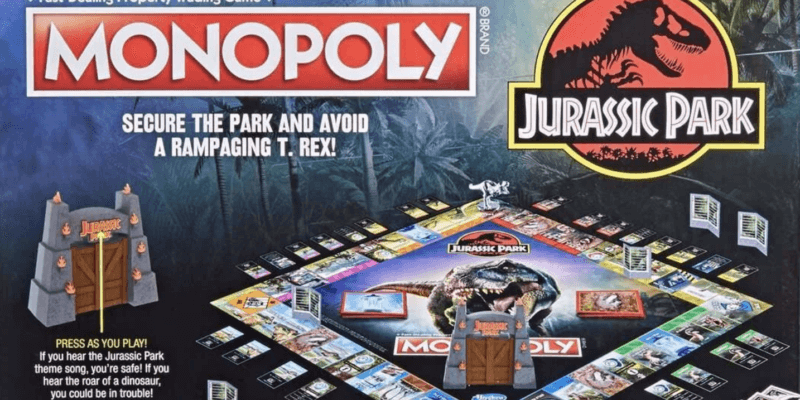 Are you a Jurassic Park fan? Even if you are just a lover of all things prehistoric and dinosaurs, there is a new monopoly game that you need to try!

Jurassic Park was released in 1993, and created a fandom and franchise that would continue to grow and live on forever, evolving now into Jurassic World and not only filling our theater and TV screens but also, many of our theme parks! Universal theme parks worldwide from Universal Studios Florida to Universal Studios Hollywood have Jurassic sections within where Guests can literally step into Isla Nublar and the world of the films.

But when you’re at home, why not turn family game night into a Jurassic event? Hasbro creates many themed Monopoly board games, but this recent Jurassic Park one is super excited because there is a twist! This game has a T-Rex on the loose that can rip up your property and destroy everything! But on the plus side, the game also features the Jurassic Park gate that playing iconic music when opened, which is very unique to this version of the board game.

The description of the game reads:

Secure dinosaur paddocks and other areas but beware of the T. Rex; it doesn’t follow rules! Build fences to protect paddocks from the attack and earn money by charging rent, but prepare for damaged property. Activate the gate to hear the Jurassic Park movie theme song or a dinosaur roar, which will determine how much money to collect. The last player with money when all others have gone bankrupt wins. The game also ends if the T. Rex damages all properties before they can be protected with fences or repaired. Then everyone loses! The Monopoly: Jurassic Park Edition game is for kids ages 8 and up. 2-6 players, ages 8 and up. Includes gameboard, 6 Character tokens, 1 T. Rex token, Jurassic Park electronic gate, 28 Title Deed cards, 16 Cold Storage cards, 16 Impact Tremor cards, 24 cardboard fences, 2 Dice, money pack, and game guide.

The Jurassic Park Edition Monopoly game will be available in May, but customers can make a pre-order purchase on Entertainment Earth now for $29.99. Click here to pre-order yours today!

It will be fun to see what characters players can pick from, although I would guess that Dr. Ian Malcolm (Jeff Goldblum), Dr. Alan Grant (Sam Neill), and Dr. Ellie Sattler (Laura Dern) will be up for grabs!

Do you want to own Jurassic Park monopoly?

Comments Off on ‘Jurassic Park’ Monopoly Brings Movie to Life!