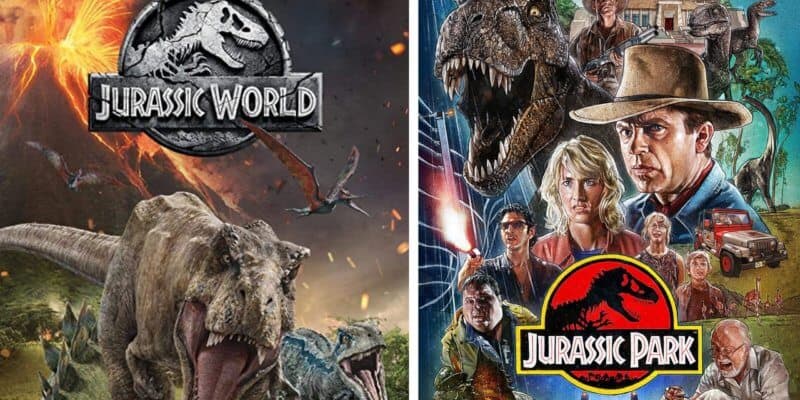 At Universal Orlando Resort, there have been many changes over the years, including the introduction of brand-new attractions and lands. The next big addition that will soon be opening for Guests is Jurassic World‘s VelociCoaster at Universal’s Islands of Adventure.

The roller coaster attraction will take place in the Jurassic Park section, right next to the Wizarding World of Harry Potter, and introduce more of the current Jurassic World IP. That being said, once the attraction debuts, it will be interesting to look at the ongoing story of the land.  Jurassic World serves as a sequel franchise to Jurassic Park, and one that happens many years later.

However, to have the Jurassic Park Discovery Center stand as the backdrop to the Jurassic World VelociCoaster does not truly make sense, because these things would not have existed together at the same time.

If we take a look at other themed lands at Universal Orlando Resort such as The Wizarding World of Harry Potter, we can see that although the theme park mogul created both Diagon Alley and Hogwarts, they placed them in two separate parks, and two separate lands, because putting them in the same land would not follow the story details and would ruin the immersion that has been so perfectly crafted. In the books and films, Diagon Alley and Hogwarts are not located directly next to each other, so it makes sense for them to be in two different theme parks.

So to have two different IPs that exist on different timelines encompass one area of Universal does not really make sense for the story of the land. Of course, the land was themed originally for Jurassic Park, with the staple attraction being Jurassic Park River Adventure, but if Universal wants to truly create an immersive “Jurassic” land, turning River Adventure into a Jurassic World themed section may be needed. This is something that Universal Hollywood has already completed!

Personally, I think it is a little odd for the Universal Orlando Guest experience to enter under the Jurassic Park archway, but never under a Jurassic World entrance, and then, all of a sudden, see technology and recognize plot points that were not introduced in the film franchise until years later.

That being said, since both films do piggyback off one another, the argument could be made that when Guests enter, they are discovering Jurassic Park, which shows audiences how the park was made from the inside out, and then we transition to Jurassic World, which allows Guests to see the scope of the creation as it becomes a place where people visit, to show the progression of Isla Nublar.

However, to do this, we would need to see more theming that differentiates the areas and allows Guests to almost time travel from one era and film to the next. Plus, with Jurassic World: Dominion coming out — which will bring characters from both films together — it would be pretty cool to be able to walk through that storyline as a Universal Studios Florida Guest.

You can see Universal’s entire movie release schedule here, which includes what is going directly to digital and what is still waiting for a theatrical release. If you want more Jurassic World, you can check out Camp Cretaceous on Netflix. Camp Cretaceous is an animated series that takes place in Isla Nebular. There are two seasons available for viewers to watch Camp Cretaceous, with a third approved.

Still, I personally do not think that Universal will be ridding themselves of Jurassic Park anytime soon. The IP is a classic and boasts a cult-like fandom. Plus, Universal Orlando’s Cinematic Celebration only references two classic films, with Jurassic Park being one of them in tandem with Jurassic World. Considering that is a fairly new show, it goes to show where the franchise still holds importance at Universal for now.

Do you think that Jurassic World and Jurassic Park can coincide within the same land?