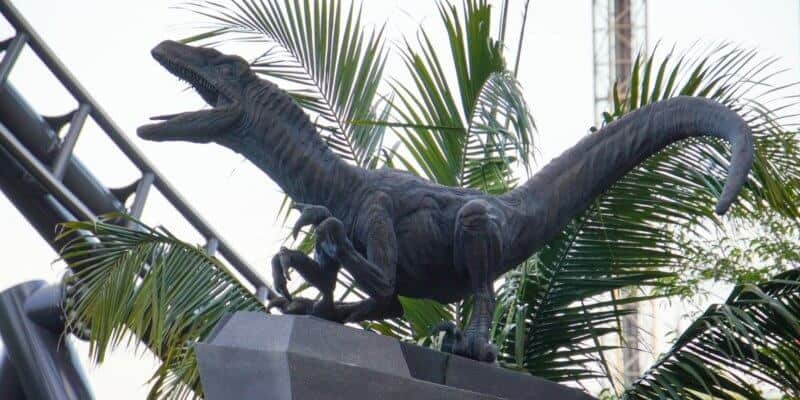 How many dinosaurs are too many? When talking about VelociCoaster, the limit does not exist.

Jurassic World VelociCoaster is the newest attraction that Universal Orlando Resort Guests are patiently waiting to ride. With a summer 2021 release date, and a consistent hype train provided by none other than Universal Orlando Resort, any change or addition to the roller coaster at this point seems like a big deal as we near the finish line.

One of the most exciting things about VelociCoaster will be it’s theming. Set in the Jurassic Park section of Islands of Adventure, VelociCoaster carries out the Jurassic World franchise where Owen Grady (Chris Pratt) is stuck in a paddock with raptors. Before it was named VelociCoaster, many were deeming it Jurassic Coaster! In the attraction, there is detailed rock work, 3-D screens, as well as a multitude of raptor statues that sit both on the tracks and around the queue, setting up a terrifying experience for the Guest who is about to ride.

Now, it seems that more dinosaurs have been added to the attraction, just when we thought Universal couldn’t add anything else to this over-the-top coaster! Theme park photographer Bioreconstruct (@bioreconstruct) took to Twitter to showcase yet another velociraptor added to the exterior of the new coaster, this time, even farther away from the queue entrance. It seems the Guests will likely just need to follow the dinosaurs to get to the coaster if they are ever unsure of where to enter.

One of a pair of Velociraptor statues revealed today at the waterfront plaza entrance of Jurassic World VelociCoaster.

One of a pair of Velociraptor statues revealed today at the waterfront plaza entrance of Jurassic World VelociCoaster. pic.twitter.com/wVgVLMcYTt

Bioreconstruct notes in his Tweet that this is just one of a pair of raptors, which means that he has reason to believe that a second raptor will be placed close by.

Bioreconstruct then continued to share more photos of the blood-hungry statue showcasing the details on the dinosaur from the claws to the wait its skin is formed going down its back.

Details of a Velociraptor statue near Jurassic World VelociCoaster. pic.twitter.com/XEacoqIt0B

It also seems that Bioreconstruct was able to provide us with a second big update, and that is that the front sign seems to finally be fully complete.

Prior to this, the sign did not light up and the two raptors who guard the queue’s entry were also not illuminated. Now, it seems that every day another final detail is added to the coaster, which is exciting for Guests to see.

As we mentioned earlier in the article, VelociCoaster will also make use of screens. This is something that Universal does quite often, but it will be interesting to see it used outdoor on a fast-moving coaster. It seems that Universal is really making use of dinosaurs both real and on-screen to create an immersive experience for Guests riding the coaster.

Stay tuned to Inside the Magic as we continue to bring you up-to-date information on VelociCoaster updates, and the eventual opening information once we have it!

When do you think VelociCoaster will open? Are you planning on riding it?

If you want to visit Universal Studios, Universal’s Islands of Adventure, Volcano Bay, or CityWalk — you need a Universal parks vacation! From Halloween Horror Nights to Mardi Gras there is always something fun to do at Universal Florida. A trip to Central Florida mixed with some Universal Studios Florida will definitely get you in the theme park spirit. Click here to get started today.