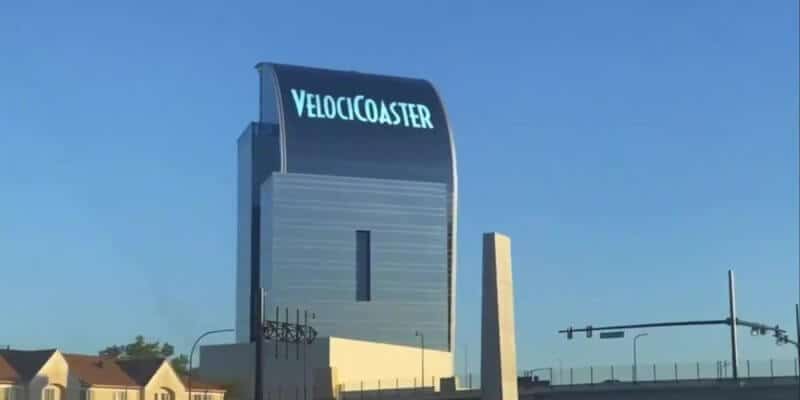 Universal Orlando Resort is gearing up to open a brand-new roller coaster at Islands of Adventure. The VelociCoaster will be based on the ever-popular Jurassic World franchise and the hype for the coaster is real!

It first seemed like Universal had ramped up the advertising for the coaster as we inch closer to an opening date for the attraction. Upon further investigation, we realized that this ad fooled not only us but other fans, too — it is definitely hilariously cool, though! This fake ad, in particular, appeared to be on the infamous I-4 eyesore and is larger than life!

One Universal fan — and, actually, someone who was a huge part of bringing the VelociCoaster to life, as he worked on the coaster extensively as the creative director —  Gregory Hall (@G_Prodigy) took to Twitter to share a quick video of the larger-than-life building and his own version advertising. Though this at first appeared to be real, it is actually a manipulated video. False, alarm everyone — it even fooled us at first!

When you know you’ve made it in Orlando? #velocicoaster #i4 #culture @UniversalORL pic.twitter.com/cAmgY3s7HG

For Orlando locals, this particular building that can be seen from I-4 became notorious after sitting unfinished for an extended period of time. Many locals dubbed it the I-4 “eyesore” and it has been several memes ever since!

Although Universal Orlando Resort didn’t confirm that the advertisement is real, Universal responded to this Tweet twice, and we love seeing Universal continue to have a playful relationship with their fans on social media:

Again, Universal still has not announced an opening day for the VelociCoaster, and this new advertisement still states, “Summer 2021”. Fans will need to continue to hold tight on an opening day, but it is great to see the excitement continue for this new attraction.

Something we do not need to speculate on is that Universal announced they will be resuming work on Epic Universe immediately. Epic Universe is a brand-new theme park planned for the Universal Orlando Resort. This theme park will be home to the Orlando version of Super Nintendo World.

There is plenty to be excited about if you are a Universal Orlando Resort fan!

What do you think of this giant VelociCoaster advertisement? Let us know in the comments!