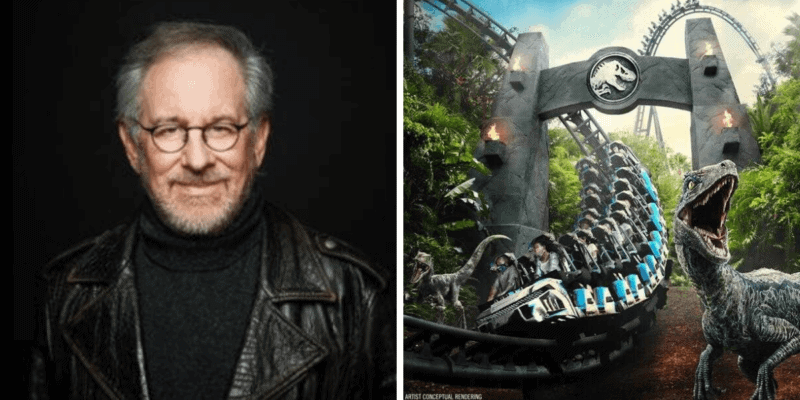 Universal is gearing up to open a brand new rollercoaster at Island’s of Adventure this summer. While we do not have an official release date aside from some point in summer 2021, the VelociCoaster is a highly anticipated attraction among fans. Now, Universal has released details on how this brand new innovating roller coaster attraction came to be, and how they managed to get the blessing of the godfather of the Jurassic Park / Jurassic World franchises, Steven Spielberg.

Related: What Are VelociCoaster’s Giant Raptor Paddocks For?

In a post to their official blog, Universal interviews two members of their creative team who are working on the VelociCoaster project. Gregory Hall and Shelby Honea gave some backstory on how this new coaster was able to get the blessing of Steven Spielberg.

The Universal creative team worked with both Steven Spielberg and Colin Trevorrow to make sure they got the theming and dinosaurs just right. Here is what Hall and Honea had to say about Steven Spielberg seeing the VelociCoaster:

“We were nervous, of course,” Greg says. “But then the doors open and Steven Spielberg says, ‘Hello, old friends’ and there is literally a light behind him that looks like an aura. You can’t make that up. I’ve been working with his intellectual properties for a while (TRANSFORMERS), but this was my first time really talking and sitting down with him.”

“There was this moment when we were going through everything,” Greg starts. “And he says, ‘Stop; is that really what the ride vehicle is going to look like?’ And so we pause and I look at Shelby, back at him and say ‘Yes, that’s what it looks like.’ And then he goes, ‘I absolutely love it! It looks so modern.’ Shelby and I both took a big sigh.”

As fans, we love hearing these stories, it really shows the amount of care and energy that is going into these projects at Universal. From the filmmakers to the creative department at Universal it is clear that the whole team put their passion for Jurassic World into the VelociCoaster.

I don’t know about you, but if Steven Spielberg approves of the attraction, then I am even more excited to ride it when it opens this summer!

Are you excited to ride the VelociCoaster when it opens later this summer? Let us know in the comments.

We can help you plan the perfect Universal vacation, click here for more details.

Comments Off on Steven Spielberg Gives The VelociCoaster His Blessing