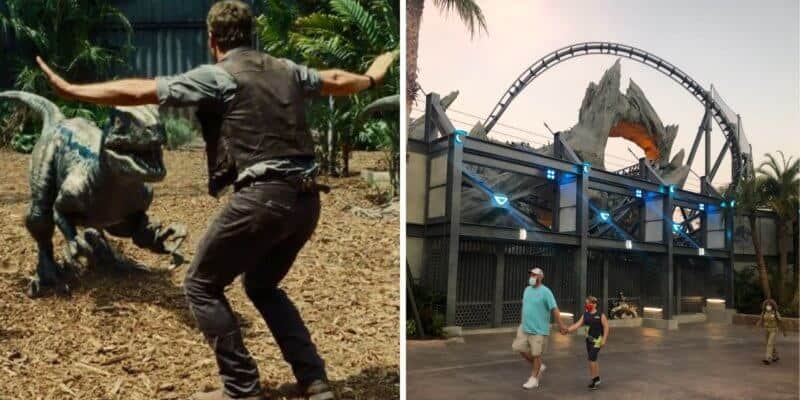 Universal’s VelociCoaster is currently undergoing many updates as it races towards opening day! The coaster, which has a summer 2021 debut, has recently added many more dinosaurs to the queue of the attraction. However, there is another section of the attraction that we have yet to discuss.

Alongside the attraction at Universal Orlando Resort, guests will see massive raptor paddocks numbered from 1-5. Currently, the paddocks are closed with their gates shielded shut, but the fact that they are numbered and the other sections of the queue points that there may be more going on behind these specific paddocks.

Considering Jurassic World, VelociCoaster’s designated IP has numbered paddocks for the raptors in the film, this facade exterior is likely recreating just that. The numbering system actually integrates more sections of the Jurassic World IP within Universal’s Islands of Adventure.

Related: VelociCoaster May Be the Start of Universal’s ‘Jurassic World’ Land

Related: Photos: VelociCoaster Has Riders for the First Time!

But will these paddocks have anything more to offer than just their physical appearance? Considering the attraction’s queue and entrance are already well carved out, the thought of having 5 more entrances does not really make sense. Another option of what could lie behind these gates could be the possibility of locker rentals. Many Universal thrill attractions require guests to lock up their bags and loose articles before riding. VelociCoaster, which will be the most thrilling coaster in the park, will very likely require the same thing. If so, this area would be spacious enough to have lockers behind it, and the numbers — which may just be theming — could also act as a numbered section for guests to head to when retrieving their personal belongings.

Show Producer of VelociCoaster Shelby Honea noted this about the coaster and its surrounding paddock:

“We always knew it was going to be a coaster, so adrenaline was very important to us. We also wanted to pull in the unique environment of Jurassic wherever we could through horticulture. There’s the dinosaurs and the teeth element; I mean it couldn’t possibly be Jurassic World unless you’re eye-to-eye with a dinosaur. There’s the paddock and the rockwork, but there’s also little precious things throughout the attraction that I think really make even a deeper layer of discovery that honors the entire history of this brand and land.”

Again, Honea affirms that all of the little details, such as the numbers on the paddocks, help to create the narrative of the attraction within the Jurassic World section of the land as a whole.

And of course, shortly after we published this article, Universal Orlando Resort replied to our team, saying simply that the paddocks are for, “Uh, holding raptors.” We suppose this is one mystery that needs no more solving.

As more final touches are done to the VelociCoaster at Universal Orlando Resort, stay tuned to Inside the Magic as we continue to report on them!

Will. you be riding VelociCoaster in 2021? Let us know below!

Comments Off on What Are VelociCoaster’s Giant Raptor Paddocks For?