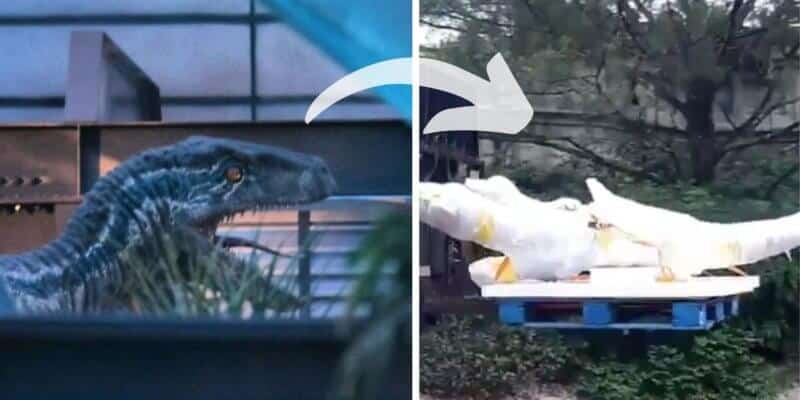 If there is one attraction Universal Orlando guests are impatiently waiting for, it’s VelociCoaster. The new thrilling and immersive Jurassic World coaster are set to debut this summer. As guests wait to go on a velociraptor run, watching the finishing touches being placed on the attraction is as thrilling as it can get!

Recently, we reported an unwrapped velociraptor on the VelociCoaster. Although we have previously seen an overview of all the dinosaurs on the track, we had yet to see how terrifying they would actually look. Now, it seems that there may be even more velociraptors on the tracks!

Orlando Mike (@OrlandoMike1995) took to Twitter to showcase a construction vehicle escorting in what looks to be the newest raptor to the VelociCoaster construction area. Orlando Mike mentioned that the velociraptor was labelled as #4, however, the coaster already has four dinosaurs in place. This likely means that there have to be at least five raptor involved in the project.

@bioreconstruct Newest raptor being delivered to Jurassic World VelociCoaster!!! Raptor had #4 on its head to this has to be one of the last Raptors left to install. pic.twitter.com/IaXF0pwWsZ

All of the velociraptors on the track are quite close to one another, so it will be interesting to see where this newest raptor is placed. The exciting thing about the incoming dinosaur is that, personally, after only seeing four raptors set up for quite some time, I did not think more dinosaurs would be added to the exterior of the coaster. This only affirms that up until VelociCoaster’s opening date, changes and additions will constantly evolve the coaster to create a more immersive rider experience.

At the moment, it is not clear if the raptors are going to be animatronics or just statues. That being said, it is expected that the speakers on the coaster vehicle itself will release raptor roars — so even if static, the velociraptors are sure to have riders in fear. This has not yet been confirmed, however.

VelociCoaster is set to have a 155-foot drop and is confirmed to feature 12 airtime moments, a 100-foot long zero-G stall, and a barrel roll over the lagoon. Both Chris Pratt and Bryce Dallas Howard are going to be featured in the coaster somehow as well. Although how the two Jurassic World actors will appear is still in question, the use of a hologram or projection is likely.

Stay tuned to Inside the Magic as we continue to give you all of the latest VelociCoaster updates!

Are you excited to ride VelociCoaster? Do you think the padlock raptor run will be immersive, or more of a thrill-seeking experience?

Comments Off on Universal Adds More Dinosaurs to VelociCoaster