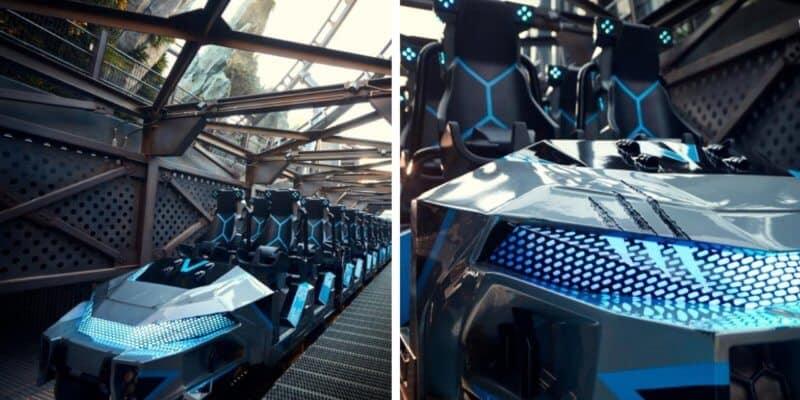 Universal Orlando is inching closer to the prehistoric era, which in our case, means Summer 2021 when the VelociCoaster will make its roaring debut. Lately, Universal has begun to give future riders small teasers on what to expect, including the jaw-dropping coaster vehicle itself.

We have already seen photos and video clips of the VelociCoaster ride vehicle, but now, we have it in much more detail, and many more angles — and it has this reporter ready to wait in line.

Ready for the hunt? You will be with these Jurassic World VelociCoaster ride vehicle backgrounds

Ready for the hunt? You will be with these Jurassic World VelociCoaster ride vehicle backgrounds. ? pic.twitter.com/zjk4CKm6Hb

It seems that by stating “backgrounds” in their Tweet, Universal posted these for fans to use as phone or desktop backgrounds, to only continue to build up the existing hype around the coaster. If we take a look at the below shot — this is an entirely new angle of the coaster and its final stop before riders will need to end their velociraptor run.

The interesting thing that we can pull from this image is that the coaster will have 12 rows, and will be able to seat up to 24 riders at a time — at least, according to what is seen here. In a previous rendering released by Universal, we saw that the VelociCoaster will have at least 2 coasters moving at once, with a possible third coaster loading guests at the loading platform. With that being the case, this coaster will have a constant rotation of 48 – 72 guests every few minutes. Considering the excitement for this attraction, a high turnover rate will be key in terms of a fast-moving queue.

We also can see that we end the attraction in a padlock containment area. Considering the storyline here is that we are in the IP of Jurassic World on a run with velociraptors — this could be the moment we as riders finally escape the dinosaurs and are pulled into safety and out of the immersive wild area that the Universal creative team has constructed.

We currently do not yet have an opening date for VelociCoaster, however, now that Universal is beginning to put heavy focus and emphasis on the coaster, as well as warning guests to keep their eye on social media — this reporter thinks an opening date will be released in the upcoming weeks. However, that is currently just speculation.

Stay tuned to Inside the Magic as we continue to give you all of the best VelociCoaster updates as we move towards the attraction’s debut! If you want to be here in Orlando to ride VelociCoaster this summer, click here to begin planning today!

Are you planning on riding VelociCoaster? Do you think it will be Universal’s best coaster yet?