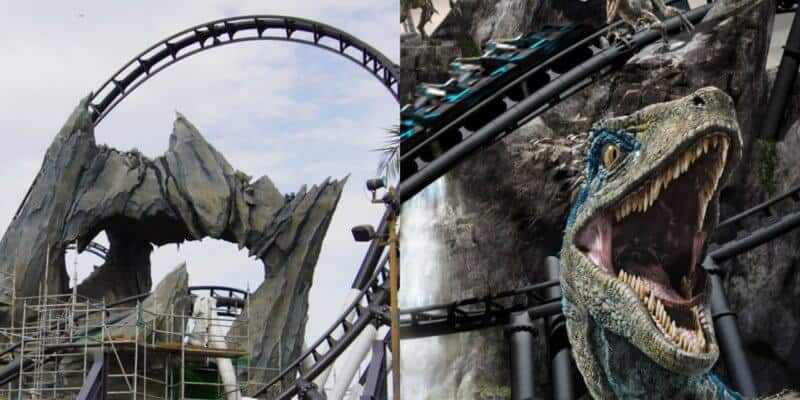 Now that we have all seen the epic VelociCoaster teaser trailer after Universal Orlando’s coaster announcement last week, many of us are getting very excited to ride. From Universal’s Islands of Adventure’s reopening to now, the VelociCoaster has been progressing at very speedy rates.

It’s hard to imagine there was a time when the track wasn’t complete. We have seen the coaster on it’s tracks, and rock work begin to take form. There have even been small details like raptor eggs inserted into the attraction to begin telling the coasters story, which we now know will be linked to a us joining a velociraptor pack on a run.

The attraction story line will be original, but is evolving from the Jurassic World franchise, bringing the latest Jurassic based films to the Universal theme parks. From the official release, we know the roller coaster will:

We have seen ride vehicle testing commence, but now it seems the coaster is about to go through the dive loop section for the first time ever. From the many photos we have seen, this is one of the final steps of pull-though vehicle testing for the VelociCoaster. This means the roller coaster will now test flipping completely upside down which we can see is currently in prep thanks to Ebuilder on Twitter.

After watching the VelociCoaster trailer, it became clear that Universal was going to create a very immersive prehistoric world for a coaster that seems to take place primarily outside. We say primarily because there are 2 buildings within the coasters tracks that we are still unsure as to what will be featured there. Fans hope that these will be “show buildings” where animatronics can come to life and perhaps take a screaming photo of guests riding the coaster, but it could also be loading platforms.

With the announcement that Jurassic World would be the leading intellectual property of the attraction, a show building would have the opportunity to introduce the film’s characters into the attraction, like we have seen on attractions within The Wizarding World of Harry Potter. All of that is speculation, but from the expansive track that is visible outside, it seems this is where most of the attraction will take place.

To create an immersive outdoor coaster is a challenge, but one the Universal creatives are clearly taking on. The rock work is beginning to look more and more like the trailers renderings which we can see from bioreconstruct’s consistent updates:

The jagged edges and rough rock work look just like what we saw in the VelociCoaster video and photos. It seems that we are going to be able to be immersed in the work by physically going through the rocks. Considering we will be surrounded by such detail moving in ever-changing directions and speeds, this ride has the potential for a high re-rideability rate, allowing you to look in a different spot each ride and hopefully catch another detail that helps tell the whole story.

Do you think the VelociCoaster will be the best coaster at Universal? Let us know.

Comments Off on PHOTOS: Universal is Testing the VelociCoaster’s Dive Spiral