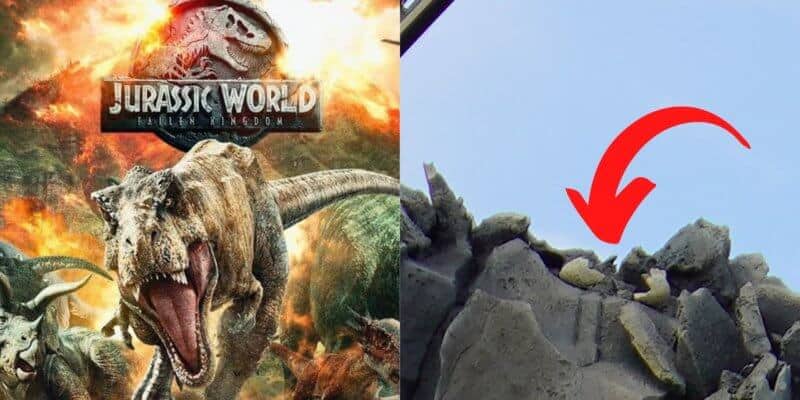 Watching new attractions come to life is some of the most exciting aspects of an ever-evolving theme park. At Universal Orlando, the anticipation of the new unnamed Jurassic Coaster has had us all on the edge of our seats.

Universal’s Islands of Adventure is launching a new Jurassic Park/Jurassic World themed coaster that many fans have deemed the ‘Velocicoaster’. What has been riveting to watch is the progression in construction of the Jurassic Coaster after Universal Orlando reopened this June.

We went from questioning what kind of attraction this would be, to a full completed track, to ride testing, in what has felt like the blink of an eye.

A look at the unannounced Jurassic Park roller coaster. Notice cars suspended by ropes on the track. A pull-through test, in reverse direction. Cars here since last night due to bands of light rain. pic.twitter.com/sdYjqjOmNs

Now that we can see the base of the attraction is complete, our minds are going straight to ‘What is going to make this ride special?’. Universal Orlando does a fantastic job when it comes to theming on coasters. If Hagrid’s Motorbike Adventure in The Wizarding World of Harry Potter is any indication of how themed this new Jurassic Coaster could be, we are ready to slip into the Mesozoic Era.

With 2 buildings visible in this attraction so far, many of us are hoping that these are going to be show buildings where animatronic dinosaurs will come to life and immerse us in the story this attraction is going to have. And after seeing these latest developments — I think there will definitely be a story.

Universal Orlando could get away with making this attraction purely a thrill coaster. Attractions like The Hulk at Universal’s Islands of Adventure prove that thrill alone will be a success.

Of course that attraction has a slight storyline to it, but there are no props or scenes to look at when you ride, the point of that attraction is thrill. The Jurassic Coaster’s track also looks like it will likely be the second most thrilling coaster at IOA after The Hulk but this time with a much stronger story.

Thanks to @bioreconstruct on Twitter, watching the progress of the Jurassic Coaster has been easy. The latest we have seen is the development on the rock work of this attraction.

From this shot, it seems as if we as riders will be entangled within the rocks as we ride certain sections of the coaster. The jagged edges and sharp points heightens scary thrill element that comes along with any dinosaur attraction.

We can see that this is the highest the rock work has been so far, but with scaffolding in place, there is always a possibility the rock work can go higher. This will not only be fun to see when riding the attraction, but it also allows Guests to be visually stimulated with something more than just a track while walking past the attraction.

With the rock work in place, the most exciting thing to see has been the details that are beginning to go into this attraction. We have seen dinosaurs being air lifted in, so we know that they are going to make an appearance, but the next part of the story are their eggs. In the rock work we can now see that there will be hatched dinosaur eggs.

Eggs have been spotted at the top most rock work of the unannounced Jurassic Park roller coaster. pic.twitter.com/PIgGIOK9Z4

This small detail could signify a few things. If we see hatched dinosaur eggs, it is likely that those dinosaurs are upcoming in the attraction. Also, by having most eggs unhatched and only one cracked open, its alludes to the idea that one escaped. The fact that this little detail is already in place when the main concern of the Jurassic Coaster is currently construction based gives us hope that this attraction will pay a close eye to detail.

Stay tuned to ITM for all your Jurassic Coaster updates!

Are you excited for when the unannounced Jurassic Coaster opens? Let us know in the comments.

Comments Off on Could Dinosaur Eggs Hatch on Universal’s Jurassic Coaster?