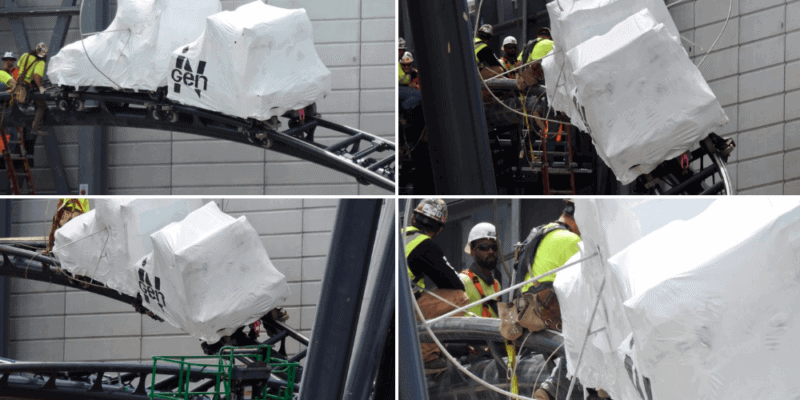 Updated: We now have video footage of the vehicle testing, as well as a simulated ride POV for Universal’s Jurassic Coaster.

If you are like us, you have been tracking the new Jurassic Coaster construction progress at Universal’s Islands Of Adventure. The Jurassic Park-themed roller coaster at Universal Orlando Resort was meant to open in the summer of 2020 but has been delayed due to the pandemic.

Although the new coaster is not yet confirmed with a name, fans have been rumoring that the name will be the ‘Velocicoaster’. We have seen raptors and dinosaurs being flown into the attraction, and just under 2 weeks ago we saw the track completed.

The most exciting thing about all of this is that today there are ride vehicles being tested on the track.

On Twitter, @coasterspotting posted these photos and is also posting a full video shortly. Stay tuned to ITM as we will post it here once it is released!

Right away we can see that the coaster train is currently only two karts long and appears to hold only eight people. The mysterious vehicles remain covered and feature the logo of the corporation that owned Jurassic Park and then Jurassic World, InGen. This may change as the new Jurassic Park coaster is only in its testing phase. But for now, this is what we can see!

A close look at cars being slowly moved through the unannounced Jurassic Park roller coaster. Covering has InGen logo on it. Note a pink chain, and the fabric rope controlling the cars descent at this point in the track. The outer frame represents maximum rider arm reach. pic.twitter.com/GIuer7YGs8

The back of the second ride vehicle does lend us to believe that there will be more attached with the back looking a little short. There is also a circular link that we can see through the white cover that looks like it would hook onto another coaster vehicle. Again, all speculative but exciting none the less!

Also notice the inGen logo on the ride vehicle coverings that can be seen in both Jurassic World and Jurassic Park! We love this little detail.

Y’all. InGen is in both Jurassic Park and Jurassic World. Seeing the logo at the coaster does not mean it must be a Jurassic Park attraction. pic.twitter.com/3p638moOXe

How will the ride work?

Right now we can see a very fun looking track, as well as 2 indoor sections. These may be showrooms or loading areas. Showrooms would be the most exciting, and after seeing what Universal has done with Hagird’s Motorbike Adventure, showrooms are definitely a possibility. It will be exciting to see if animatronics are involved in the new coaster, but after seeing its progress, I have a very good feeling about this ride.

A 2-photo sequence showing one movement of unannounced Jurassic Park roller coaster cars in a passage and clearance test. Cars have been lowered in reverse direction. This high-speed S-turn track actually heads into the station.

A 2-photo sequence showing one movement of unannounced Jurassic Park roller coaster cars in a passage and clearance test. Cars have been lowered in reverse direction. This high-speed S-turn track actually heads into the station. pic.twitter.com/X6QfTxe4ZL

The Coaster Spot on youtube also documented their time taking photos of the new vehicle testing on the attraction. Check out the full video below.

And if you want to take it a step further — Amusement Insider also put out a youtube video of a virtual POV of what the attraction may look like based on the ride tracks we can see.

Are you excited to ride this new Jurassic Coaster? Let us know below!