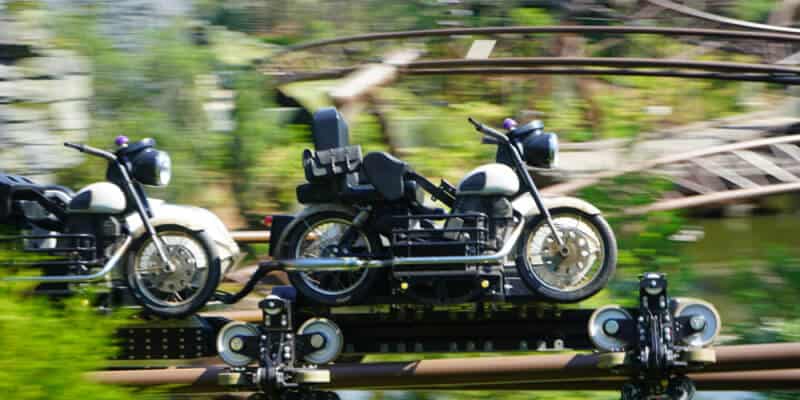 Universal Orlando has revealed its first in-depth look inside Islands of Adventure’s upcoming Hagrid’s Magical Creatures Motorbike Adventure attraction. In short, it seems that the attraction will be a magical and exciting high-flying adventure!

Recently, Universal Orlando invited Inside The Magic out to see the new attraction up close on a visit to its construction site. During our visit, we got a preview of the ride in action on the track, a technical rehearsal of its queue and some insight from the attraction’s creators, who discussed its design, interior scene experiences, and its fast and thrilling motions! See the new ride in action in the video below!

The newest attraction to The Wizarding World of Harry Potter – Hogsmeade is centered around Rubeus Hagrid, the beloved half-giant and Keeper of Keys and Grounds at Hogwarts. In this new attraction, guests get to fly deep into the wilds of the Forbidden Forest with him as their guide, beyond the grounds of Hogwarts castle to see magical creatures and experience some surprises along the way!

The experience begins when guests first enter the queue. The entrance is the same from Dragon Challenge, the former attraction that used to reside in its new spot. However, it was reimagined and it now features some new elements.

Because it was under construction, we were not allowed to take pictures. Although, we can tell you that it’s filled with all-new themed elements found along its path. Some of these decorative items include a new sign, “which evokes Hagrid,” said Gary Blumenstein, Creative Director for Hagrid’s Magical Creatures Motorbike Adventure. “This is where you begin your journey.”

This takes you to the entrance of a massive and rustic structure, which houses not only the rest of the queue but also part of the ride. Below is a look at the outside of the structure, which according to Blumenstein, was designed in part by the Warner Bros. film team and Stuart Craig, the production designer behind the “Harry Potter” films.

“It’s always been in the forest, just never seen in the films,” Blumenstein continued.

We weren’t allowed to film or take pictures past this point of the queue. But, beyond these doors continues your journey inside. As you enter, you’re met with a small rounded hallway decorated with an array of themed elements hanging from the ceiling and Hagrid’s voice (voiced by Robbie Coltrane), telling you to “follow the path.”

After moving through corridors, guests are then stopped in a hall where they meet Hagrid and Arthur. Here, visitors experience a pre-show experience brought to life with digital projection and special effects starring Hagrid and Arthur Weasley, who welcomes you to the class and discusses what’s to come.

The video is similar to the one guests experience after getting off the lift in the queue of Harry Potter and the Escape from Gringotts at Universal Studios Florida.

We don’t want to spoil the video completely. Although, we will say that it’s about three minutes long and is quite cute as it includes some goofy scenes with Hagrid and a few interactive 4D elements.

Ultimately, this is where Hagrid tells visitors that guests are going to journey through the Forbidden Forest using the motorbike and that Arthur is there to help modify Serious Black’s motorbike and duplicate it to take you to the edge of the forest.

Once you move through here, you go through another themed hallway and a quarter where Hagrid has a collection of eggs. Then guests move down into tunnels to “the chamber,” a room where Hagrid cross-bred a few different magical creatures to create Skrewts, which he grew and bred in the room.

Blumenstein revealed during the tour that in this room was where Hagrid raised the Skrewts until they were too big. This was when he moved them to the outbuilding, which is what you experience on the ride. This scene was originally featured in the fourth book from the series, “Harry Potter and the Goblet of Fire.”

The new attraction is a rollercoaster, which features speeds up to 50 miles per hour. Additionally, the experience also offers a backward motion, a free fall drop at the Devil’s Snare moment of the ride and a “spike element,” where the ride ascends upwards into the sky, rolls backward and then accelerates at speed.

During the interior moments of the attraction, the ride vehicles will slow down and sometimes stop, depending on the scene guests are experiencing. Blumenstein said these parts of the ride are “very thrilling” and feature upwards of over 100 animated effects per scene.

In total, there are five scenes in the attraction. These include the Blast-Ended Skrewt, Centaurs, Devil’s Snare, Cornish Pixies, and Fluffy, the Three-Headed Dog.

Each train holds up to fourteen people with two people riding side by side in each ride car. Blumenstein shared that guests will have the opportunity to choose either the motorbike seat or the sidecar prior to approaching the loading area and that, “the sidecar is a thrilling experience. The motorbike is much more out and open and exposed with how you sit in the seat.”

Blumenstein also shared that overall, “the front end of the train is much more thrilling. The back end is also thrilling, but you get more show in the back.” He shared that this becomes the opposite when the train moves backward on the track.

According to Blumenstine, the attraction still does have a little bit of a way to go prior to it being ready for its opening on June 13. Some of these final touches include additional construction of elements around the ride track and the queue.

For those wondering, guests do have to be 48 inches or taller to experience the ride and the queue does contain a few nods to the old Dragon Challenge attraction that used to sit in its place.

When asked why Universal wanted to create this attraction, which centers around Hagrid, Blumenstein said the company wanted to expand on Hagrid’s story in the land. The Wizarding World already has the Flight of the Hippogriff attraction, which is geared toward younger guests. However, they wanted this new attraction to introduce more challenging adventures and magical creatures to visitors.

Are you going to experience Hagrid’s Magical Creatures Motorbike Adventure when it opens at Islands of Adventure? Let us know in the comments below!