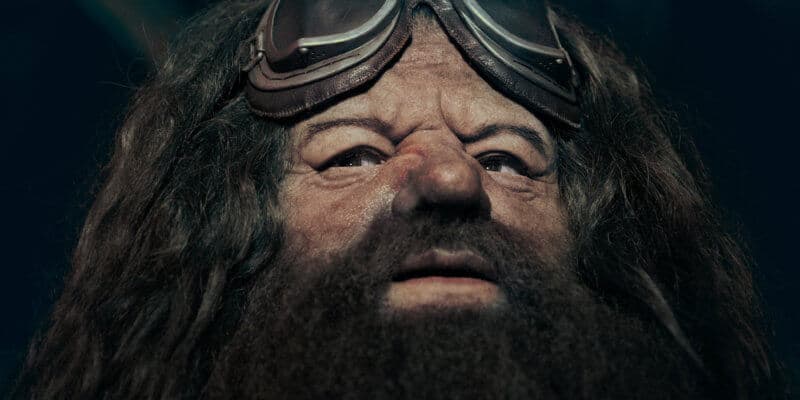 The debut of Hagrid’s Magical Creatures Motorbike Adventure is quickly approaching and as it nears, Universal Orlando has released another peek at the ride, which features their most life-like animated figure ever: Hagrid.

Naturally, one might have assumed this new attraction coming to Universal Orlando would include Hagrid. However, now it appears he will be in the form of the theme park’s most advanced animatronic ever seen before. When the attraction opens June 13, guests will come face-to-face with this life-like Hogwarts gamekeeper during their journey on their ride through the Forbidden Forrest.

In the ride, the animatronic will try to contain his beloved Blast-Ended Skrewt while guiding guests through their adventure into the Forbidden Forest, where they’ll encounter some of the wizarding world’s rarest magical creatures.

This new animated figure was brought to life by Universal Creative, the team responsible for creating Universal’s iconic rides and attractions. According to Universal, the team spent thousands of hours creating Hagrid’s animated figure with a level of detail that has never been done before, working alongside actor Robbie Coltrane (who portrays Hagrid in the “Hard Potter” film series) to develop the figure.

Universal reports that no details were spared when replicating Hagrid for this one-of-a-kind experience. Every detail about the Hagrid animatronic is authentic to what has been featured in the Harry Potter film series, all the way down to his iconic pink umbrella.

A digital scan of Coltrane’s mouth was used to create Hagrid’s teeth and his face was sculpted by hand. Hagrid’s costume was designed by the same team that created his on-screen wardrobe. For the attraction, Coltrane was called in to record a custom script. The new animated figure stands at 7 feet 6 inches tall, exactly proportional to Hagrid in the film series.

“Hagrid is such an iconic character and an integral part of the Harry Potter franchise, so we were excited to develop a truly innovative and authentic animated figure to bring him to life for this experience,” said Thierry Coup, Senior Vice President of Universal Creative. “We worked tirelessly to make sure Hagrid’s full essence was captured with the utmost attention to detail for our guests to feel completely immersed in this all-new adventure.”

What are your thoughts of this new Hagrid animatronic? Let us know in the comments below!