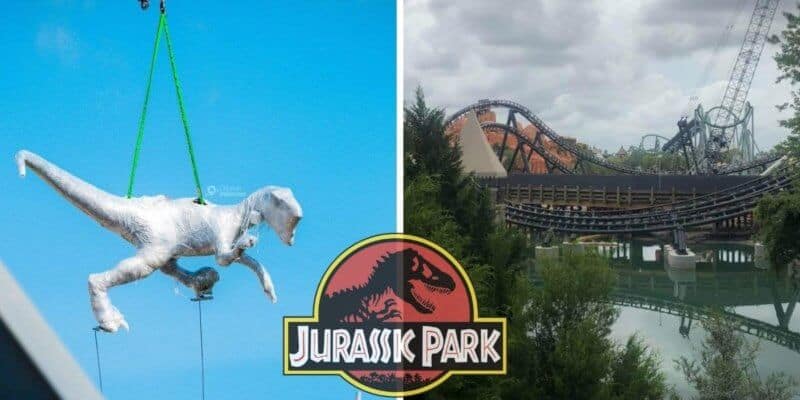 And now it looks as though the construction on the roller coaster is continuing at a steady pace over at the theme park as Orlando Informer posted this tweet not too long ago with a photo of what looks to be a wrapped up giant raptor.

Life, uh, finds a way… just like this giant wrapped raptor is making its way onto the unannounced coaster in Jurassic Park via crane. pic.twitter.com/oB4Qjbv36v

Though, the funny part is, and as Scott Gustin points out, the Jurassic Park coaster still has not been officially confirmed by Universal. So even though all signs are pointing to this themed coaster to be true, the theme park still has not yet publicly made a statement or confirmed this to be accurate.

In case you haven’t been following, this Tweet from 2019 talks about the assumed layout of the unannounced Jurassic Coaster at Universal Orlando. The soon-to-be roller coaster will be located inside the Islands of Adventure theme park at Universal Orlando. In 2019, they expected construction to take about 6 months, however, due to the current global pandemic, several construction projects came to a pause.

Universal Orlando has officially reopened to the general public a few months ago with several different safety protocols and procedures to keep Guests and team members safe during this unprecedented time. These include mandatory face masks, temperature checks, social distancing markers in queue lines, installed plexiglass, a virtual line system, and more. For more information on the reopening, check out our article here.

Are you excited to see progress being made on the unannounced Jurassic Park themed coaster at Islands of Adventure? Will you be riding it once it officially opens? Let us know in the comments below.

Click here to book your next Universal Orlando vacation!