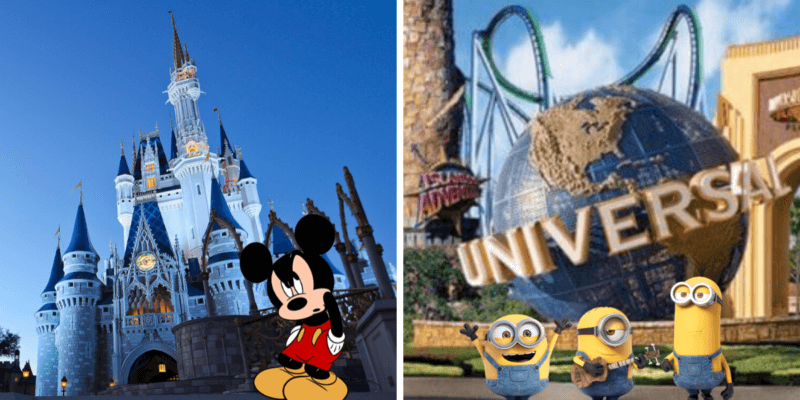 A recent report showed the Universal Orlando Resort has had a better attendance rate than the Disney Parks since reopening. And for many, this makes sense, and not just for the fact that Universal’s theme parks have been reopened longer than Disney’s. From the outside looking in–Universal appears to provide a theme park experience that is a closer return to normalcy than Disney’s.

Here are three ways Universal appears to be doing just that.

Universal makes a last-minute day in the parks easier. Unlike the Walt Disney World Resort, Universal Orlando Resort does not utilize a park pass system. Guests can just show up any day.

Disney’s Park Pass System has not been so popular with would-be Guests. Not only because of its rocky start technically speaking, but because of the very idea that pre-purchased tickets and passes are no longer valid on their own. This has also angered a lot of Annual Passholders who no longer have the near-limitless access to the parks that they were paying for. No such frustrations are felt by Universal’s passholders.

The Disney Park Pass has also bred a lot of assumptions. I have personally spoken to several people–non-Passholders–who have not returned to their favorite theme park because they are not aware that there are park passes specifically reserved for people looking to buy a day ticket. They are under the assumption that there is only one lump sum of park passes and Annual Passholders are taking them.

Is it their fault for thinking this way? Yes. But the point is that Universal does not appear to put exceptions next to their “Come in! We’re open” message. Simply the additional health and safety measures such as the mandatory face mask requirement.

Not only does Disney hit would-be Guests with the extra task of finding a reservation to enter the park, but they have also suspended park hopping. For example, I can no longer start the day in Disney’s Hollywood Studios then take the Friendship boats of the Skyliner over to EPCOT for lunch, and then take the Monorail over to the Magic Kingdom. All Guests are limited to one park per day, something many vacationers and APs are not used to.

Universal has half of the theme parks Disney has, but a Guest can visit twice as many theme parks in one day.

Universal’s primary pull is its collection of attractions, its thrill factor. While Disney World does have plenty of thrilling and iconic attractions, Disney, on the other hand, relies more heavily on its overall park experience, specifically, its characters and its stage shows are what draw in many families.

A princess will go mingle with other Disney Princesses while her big brother goes to ride Space Mountain and her mom and dad take a Jungle Cruise and make reservations for two one of the restaurants at Disney Springs. They all meet up in front of the Castle for fireworks at the end of the night. The only problem is that the character meet and greets and shows like the fireworks are suspended until further notice.

Many feel that there is no such diversity of intent, if you will, among Universal’s Guests. Yes, they have shows like Raptor Encounter (which are actually happening at the moment, just with additional health and safety protocol in place) and they have characters you can meet as well. But for many Guests these are an after-thought compared to the attractions.

Universal has also reopened its water park Volcano Bay with no face masks permitted in the pools or on the slides. Guests looking to make the most of what is left of their summer have filled Universal’s Volcano Bay to capacity while Disney’s two award-winning water parks, Typhoon Lagoon and Blizzard Beach, still remain closed.

But whichever mega-resort you choose for whatever reason, our friends at Academy Travel are standing by to help you get the most fun out of your vacation for your budget. Click here to get started and receive your free, no-obligation quote today!