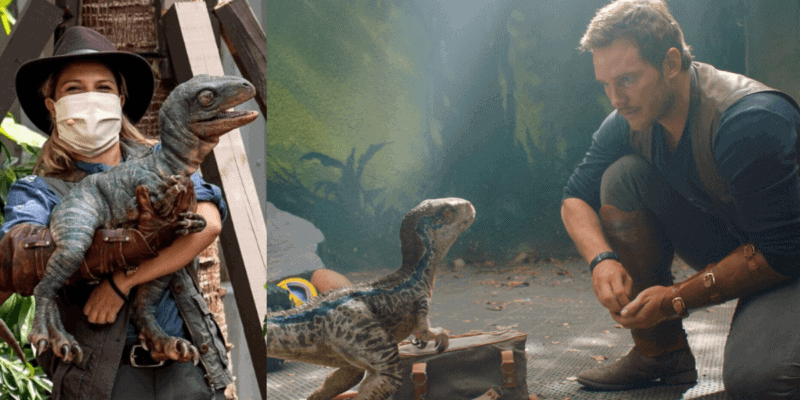 As the Universal Orlando Resort phases into its reopening, it appears a new team member has been introduced.

Her name is Sierra and she is a six-month-old Velociraptor. Pictures come to us from Orlando Informer who on-site at Universal to welcome the new arrival into the park.

Meet Sierra! She’s a 6-month-old velociraptor. We are in LOVE. ?? pic.twitter.com/AYakZbHBEI

Sierra was seen around Jurassic Park’s Raptor Encounter in Universal’s Islands of Adventure theme park. And it appears she will be one of the baby raptors to interact with guests.

The first baby to be introduced was Baby Tango in 2019 at Universal Studios Hollywood, and like Tango, we can see Sierra is being held securely by a handler who is also wearing a mask and by the looks of these pictures is wearing a mask and practicing social distancing. It will be interesting to learn the extent Sierra will be able to interact with the visitors of Isla Nublar when Universal’s theme parks reopen to the public on June 5.

Although, some Universal fans showed their hesitation to the very idea of breeding more raptors.

Getting the chance to meet baby dinosaurs like Sierra is a tamer and far more adorable way to get up close and personal with a velociraptor than having to go take a picture with Blue. Known for giving visitors a scare, the full-grown raptor demands more courage out of those who want to say hi.

In the Jurassic Park area, the new location for Raptor Encounter is now open. pic.twitter.com/j9sBBfKSUA

Universal Orlando Resort describes the Raptor encounter on its website as the following:

With a reputation as the most intelligent dinosaur on Isla Nublar, raptors are also one of the most dangerous. Those brave enough to visit the Raptor Encounter will have a chance to see the newest addition to the park’s raptor pack- Blue.

Your experience begins with one of our experts trained in raptor behavior. Here you’ll learn some interesting facts about the clever carnivore and her natural habitat.

Then, if you’re brave enough, you can try to slowly approach her to snap a quick photo. But don’t make any sudden movements because her dagger-like teeth are just inches away. Are you daring enough to get up close to this fan-favorite dinosaur?

Are you a fan of Universal’s Raptor Encounter? Let us know in the comments!