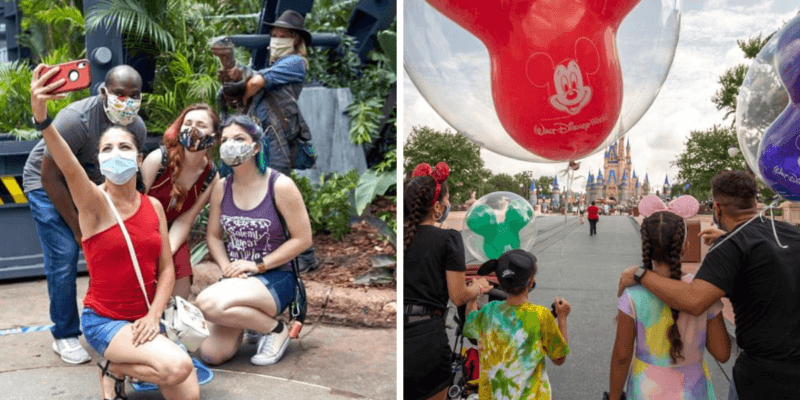 Theme parks in Florida have been open for well over a month. But who is visiting them? And which park is the most popular in the middle of the pandemic? A new report found that Universal Orlando Resort is seeing an “uplift in admissions.” But for Walt Disney World Resort, on the other hand, the theme parks aren’t bringing as many Guests in.

Orlando Sentinel reports that, according to Deutsche research analysts Bryan Kraft and Benjamin Soff, Disney theme parks worldwide are operating at 80% less than in 2019. Considering that capacity is significantly reduced at all Disney Parks that are currently open, it should come as no surprise for Walt Disney World Resort, for example, to be facing low attendance. The report states that EPCOT and Disney’s Animal Kingdom are the best performing parks for WDW right now.

But by comparison, Universal Orlando Resort seems to be more successful during the current pandemic. On Saturdays, for example, attendance at Universal’s theme parks is improving, though attendance is still down 64% from 2019.

It’s important to note that Universal Orlando opened its theme parks — Universal Studios and Islands of Adventure — on June 5. Over a month later, the reopening of Disney World’s theme parks began with Magic Kingdom and Disney’s Animal Kingdom on July 11 and EPCOT and Disney’s Hollywood Studios on July 15.

Many even suspect that the lack in attendance at Walt Disney World is due to the fact that a majority of the Guests who typically visit are not locals or Annual Passholders, and many people aren’t interested in traveling currently. Walt Disney Company CEO Bob Chapek even pointed out during an earnings call that WDW attendance is low. This has led many Disney fans to speculate that once Disneyland Resort reopens its southern California theme parks, there may be a higher demand, since so many more locals and Annual Passholders visit Disneyland vs. Disney World. Only time will tell, however, as we won’t yet know how the California Disney Resort’s attendance will compare to that of Florida’s until a later date.

We continue to monitor the operations of Walt Disney World Resort as well as Disney Parks and Resorts worldwide. Currently, Disney World in Florida, Disneyland Paris, Tokyo Disney Resort, and Shanghai Disney Resort are all open. Hong Kong Disneyland re-closed weeks ago, and the theme parks of the Disneyland Resort have remained temporarily closed since mid-March.