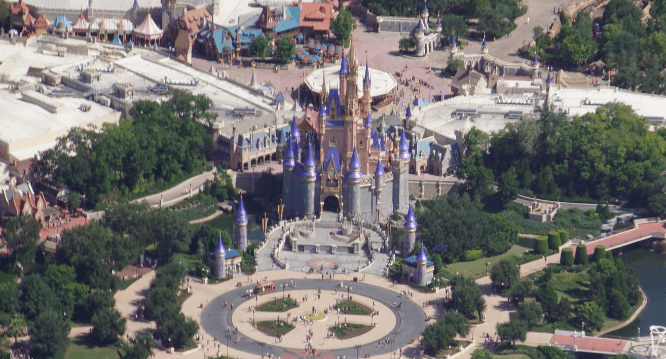 The short answer: Not very crowded at all!

During the first stages of that official reopening, we at Inside the Magic attempted to give our readers a glimpse into the crowd situation. But now, aerial photographs shared on Twitter by @bioreconstruct give a much better view of how truly empty these parks really are.

Let’s start with the Magic Kingdom.

Aerial photos show that Magic Kingdom is practically empty. Below we can see pictures from the Central Hub (during one of the cavalcades if you look closely), Fantasyland, and Frontierland. While there is some congregations occurring (mostly for lines by the looks of it), most of the park is extremely empty.

Aerial view of the Hub and Main Street USA at Magic Kingdom. Zoom in to spot the horse drawn trolley. Also seen is the Main Street bypass used during mix-in on event nights, and on very busy days like New Years Eve. pic.twitter.com/CvxypFQ0iu

How Crowded is EPCOT Right now?

At EPCOT, Guests will find even fewer people. And since EPCOT is almost twice the size of Magic Kingdom, that smaller number appears a lot less.

While before the pandemic, crowds of people would be more than visible–especially for EPCOT’s International Food & Wine Festival–the only real sign of people we can get is this picture of the parking lot.

This aerial photo shows how physical distancing works in EPCOT parking. Sometimes WDW parks will do a back-fill of the every-other spacing.

Areas such as Future World and even the Italy Pavilion appear to be almost completely empty.

Aerial view of construction in what will be World Discovery section of EPCOT. Guardians of the Galaxy, Play Pavilion, Space 220 restraurant (half circle at right). Also in refurbishment now are area restrooms, bottom center. pic.twitter.com/8cwHV9Dgnw

Disney’s Hollywood Studios is the only park that appears to be anywhere close to what we are used to seeing before the pandemic. While Sunset Boulevard seems sparsely populated, we see the line built up for Mickey and Minnie’s Runaway Railway outside the Chinese Theater, as well as for Millennium Falcon: Smugglers Run attraction in Star Wars: Galaxy’s Edge.

Aerial view of the physically distanced line for Mickey and Minnie's Runaway Railway. Arrow at start of the line, which eventually reaches the umbrellas, before entering the theater lobby. pic.twitter.com/o462TuR7JQ

The only area with significant crowding appears to the Toy Story Land. However, this could be in part to the area’s overall compact nature.

Aerial view of Star Wars Galaxy's Edge. Zoom in and you might spot physically distanced lines for Millennium Falcon and Oga's Cantina. pic.twitter.com/NtGmlOYXQc

We have shared news about Disney Springs before, and we discussed the crowd situation Disney has there. But it appears that the situation might only apply to evenings, and one could experience a far less crowded Disney Springs experience if they swap dinner for lunch.

@bioreconstruct shared no pictures of Disney’s Animal Kingdom Park over the past few days.

For those concerned about crowds, we hope that these pictures put you at ease and allow you to come back and experience the magic at a Disney park once again.

If you are looking to plan a trip back to Walt Disney World, our friends at Academy Travel are standing by to provide expert guidance and help you plan the most magical Disney vacation yet. Click here to learn more and receive your free, no-obligation quote today!