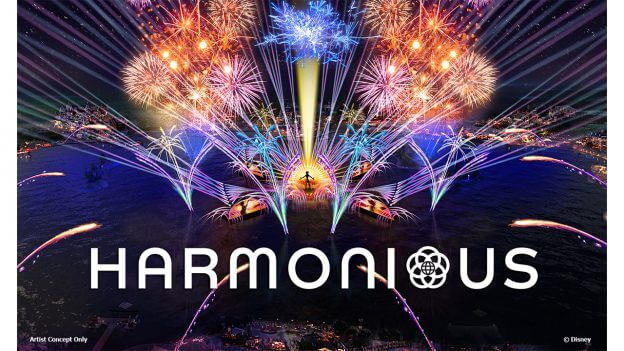 At D23 Expo in 2019, Bob Chapek spoke about HarmoniouUS and stated it would be the “largest nighttime spectacular in Disney history.” HarmoniouUS will be shown over the World Showcase Lagoon, only this show will be even bigger and more epic than anything we’ve seen before at EPCOT.

Due to the current global pandemic, construction on several projects at Disney World had to pause, including Cinderella Castle, TRON, and HarmoniouUS. However, it wasn’t long ago that we reported construction resumed on the nighttime spectacular despite not knowing an opening date.

And now, thanks to our friends over at @bioreconstruct, we can see an aerial photo of the barges which looked as though they have been worked on.

Aerial look at 4 barges of EPCOT's new HarmonioUS show. These will have rotating arms, and 2 of the barges are now getting side panels hiding the arms from view. Compare to earlier Tweet in this Thread. pic.twitter.com/0M89FfyYhZ

“We have custom LED screens that we’ll be utilizing for HarmonioUS,” Disney parks live entertainment producer Jeremy Chase said. “We’ll also be bringing back choreographed fountains that will help tell the story. And we’ll have lasers, lighting and, of course, pyrotechnics.”