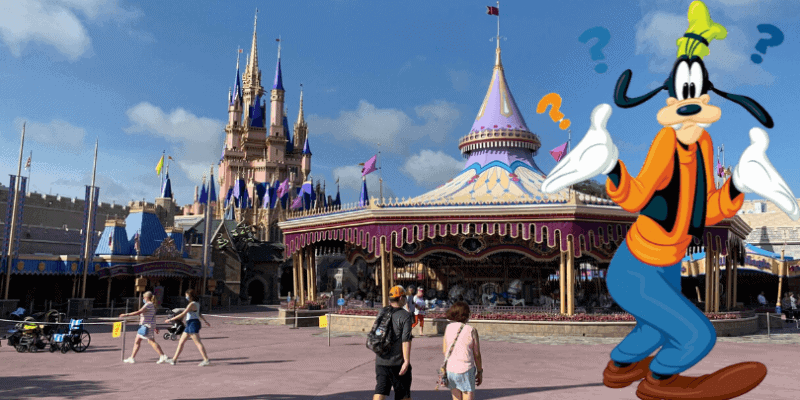 The day is finally here! Annual Passholders at Walt Disney World have graced the gates of Magic Kingdom and Disney’s Animal Kingdom parks. Some of our team were lucky enough to be on the ground and will be reporting throughout the day, revealing all the details of how the parks have adapted to the new, strict health and safety measures brought on by the pandemic.

Parks will formally reopen to the rest of the public on Saturday, despite the spike in infection cases in Florida, which has extended its state of emergency. Disney’s Animal Kingdom and Magic Kingdom will kick off the first stage of a phased reopening, followed by Disney’s Hollywood Studios and EPCOT on July 15, providing all goes to plan.

Let’s take a look at how the crowds were looking at Disney’s Magic Kingdom park, on its first preview day for Annual Passholders.

Perhaps unsurprisingly, very few Guests are at the Magic Kingdom today for the Annual Passholders preview. Walt Disney World staples like Space Mountain and even Main Street, U.S.A. were nearly deserted as only a few dedicated AP holders were present on this exclusive, low-capacity day.

Related: Visiting Disney parks on a crowded week? Use these tips on your vacation!

It’s very eerie to see the park so empty, especially on a day that was supposed to herald a joyous reopening of the happiest place on Earth.

A couple rides saw some crowding, including Jungle Cruise (Perhaps these AP holders heard that the ride could be next to be reimagined?). And of course, the longest wait time we have seen so far is for Splash Mountain. The Haunted Mansion was also reportedly sitting at a 25 minute line, though this has since passed and ride times are falling fast.

We’ll continue to provide further updates on everything to do with Walt Disney World’s phased reopening, including the AP preview day as we hear it.

Let the team at Academy Travel help you plan your next Disney vacation, no matter when you want to visit. They can help you plan the perfect theme park trip, whether you want to visit just one park or you hope to hit all four parks: Magic Kingdom, Animal Kingdom, Disney’s Hollywood Studios, and EPCOT. Contact their team for a free quote at your earliest convenience!