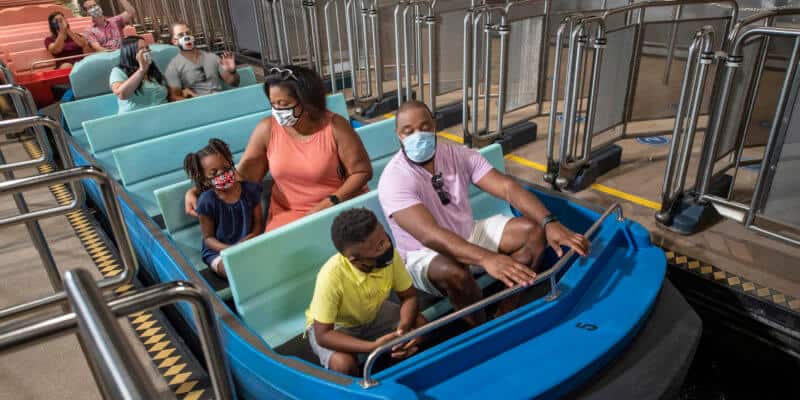 Disney Parks have reopened in phases all across the world.

Still, despite parks reopening around the globe and the U.S., a recent survey by Morning Consult and the Hollywood Reporter found that 78% of American parents don’t feel comfortable bringing their families to the theme parks in the states in 2020.

Below is some of the data found in the survey, as reported by the OC Register:

The survey found that 78% of American parents want nothing to do with a U.S. theme park this year. Next summer looks more promising when more than twice as many parents (47% in 2021 vs. 18% in 2020) will be interested in visiting a theme park with their kids.

The poll data found that 20% of parents would be less likely to visit a theme park that has a mandatory face mask policy.

Nearly one-third of parents said enhanced health and safety protocols will make them more likely to visit Disneyland, according to the survey.

We previously reported on the results found by Morning Consult in the survey regarding Americans’ willingness to return to theme parks this summer, as the pandemic continues to spread throughout the United States. The comments from Inside the Magic readers showed the truly mixed nature of opinions regarding the notion of visiting the Disney Parks right now.

One reader’s response aligned with the results of the Morning Consult survey. The commenter shared that she would visit with her husband but not her children:

“I would feel comfortable to go with just my husband not my kids. I wouldn’t take the kids because of the facemask protocol with the heat. Not to mention the magic for kids is kinda gone without meet and greets, fireworks, etc. So I can’t justify spending that kind of money for them not to experience the magic of Disney.”

Another Inside the Magic reader shared that they visited Disney World with their family and reflected on their experience:

“Our entire family went to WDW a couple of weeks ago. The safety measures they have in place far exceed any other public venue we’ve been to. The face masks became second nature rather quickly and we had little kids ranging from 1 year to 11 years. Every single one of us had a fantastic time, and all agreed that it was probably one of the most enjoyable times at a Disney park and we typically go to Disneyland twice a year. If we lived closer we would probably go again.”

In Florida, Walt Disney World Resort began a phased reopening on May 20 with Disney Springs. On July 11, theme parks began to open again, and since July 15 all four Disney World parks have been open.

On the West Coast in California, Disneyland Resort began a phased reopening on July 9 with Downtown Disney. However, since then Downtown Disney has been the only part of DLR to remain open amid the pandemic. We don’t yet know when Disneyland and Disney California Adventure will reopen.

Disney Parks and Resorts worldwide have implemented strict health and safety protocol throughout their phased reopenings. For more information on the health and safety measures at Walt Disney World Resort and Disneyland Resort, click here.

At the time of this article’s publication, the pandemic continues to spread in both California and Florida, where the two U.S. Disney Resorts are located.