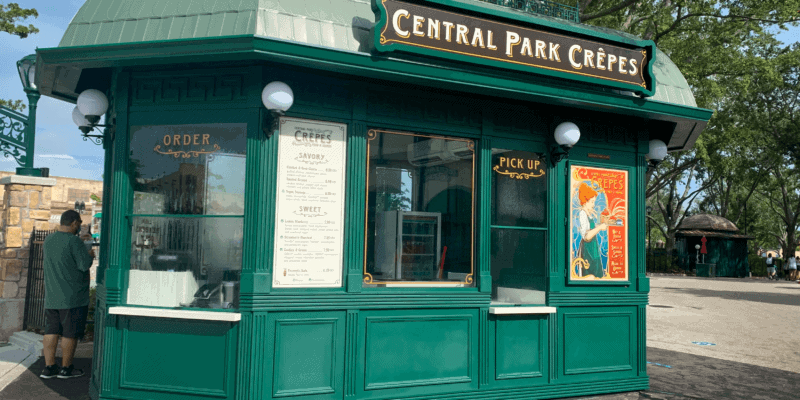 Just as important as the attractions, the food at the parks takes a backseat to no one. Whether it’s sweet, savory, a snack, or an entire restaurant, we’re there with our phones taking pics of the delicious treats. The new Central Park Crepes stand at Universal Studios Orlando is no exception.

After a couple of weeks of the aforementioned “foodie” pics all over my feed, I had to see if these crepes were worthy of all the attention they were getting. I had no idea the adventure that was in store for me and my brothers.

We got to the park at opening and went straight to the stand. It wasn’t open yet. No surprise there, it was early and the surrounding stands all had signs that stated they opened at 10 A.M.. Central Park Crepes had no signage indicating when it opened, but we assumed it would open at the same time. After riding a few rides we went back and it was still closed.

We went back to Guest Services to find out if the stand would even open. The crew member didn’t even know the stand existed. After five minutes of searching for it on the computer, she went back to ask her manager. Eight minutes later, she returned with news that they called the food service manager and determined that the stand would open at 11 A.M.

At this point in our journey for crepes, the sun had reached “Florida in August” hot and we had been at the park since 8 A.M. and had not eaten a thing. We are born and raised Floridians, but with the edition of the mask the heat was even more taxing. With a little more time before the stand opened we stopped off for a few drinks to recharge (helpful tip: be sure to use the mask rest areas available at the parks).

The time had come for the stand open. We got there and were greeted with a line (no surprise there, the hype for these crepes are real).

Forty-five minutes later we made it to the window. Only one cook is there with two stones to make the crepes which answers the question why it took so long.

The big question of which ones were we going to try was made even more difficult with each selection that sounded tasty and sounded great. Below are the options. However, I decided to go with Smoked Brisket and Strawberry Hazelnut. I am hear to tell you all that after almost four hours of of build up, these crepes are one hundred percent worth all the hype surrounding them.

The Smoked Brisket was full of warm tender meat, and a delicious golden ranch sauce. The Strawberry Hazelnut was very similar to the Hazelnut waffle that can be found at the Magic Kingdom at Walt Disney World. As for me, I feel the crepe was so much better in terms of amount, and how easy it was to devour it without making a mess. Since the crepe was made fresh to order it was warm, flavorful and just a joy to eat.

Be patient, don’t go there before 11 A.M., and enjoy this delicious new edition to the park’s many great food offerings.

Will you be trying the crepes at Central Park Crepes? Let us know in the comments!

Planning a trip to Universal Studios Orlando? Let us help you with your vacation planning!