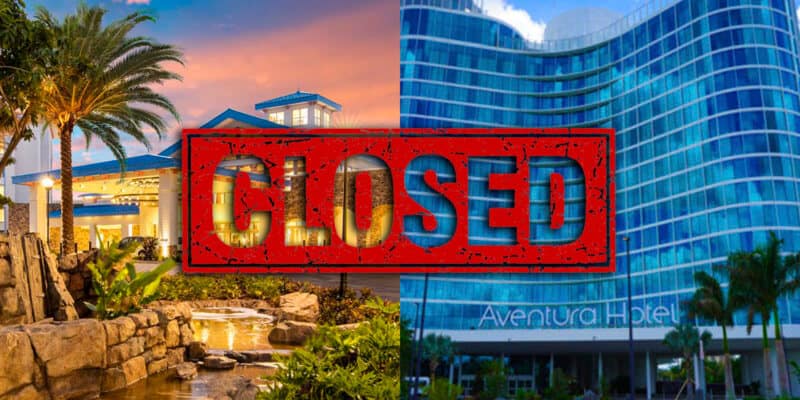 Amid recent cutbacks put in place at the Universal Orlando theme parks to make up for the lack of guests visiting the Central Florida vacation destination, the entertainment resort has announced it will begin utilizing another tactic to cut operation costs: the closing of two of its signature hotels: the Loews Sapphire Falls Resort and the Aventura. Both resorts are set to close beginning August 21.

As shared by Orlando Sentinel, the move comes as Loews Hotels say it “decided to consolidate our hotel operations as we manage through current conditions.”

“We will be operating the Hard Rock Hotel, Loews Royal Pacific Resort, Cabana Bay Beach Resort and Universal’s Endless Summer Resort – Surfside Inn and Suites and temporarily suspending operations at Loews Sapphire Falls Resort and Universal’s Aventura Hotel as of August 21,’’ a statement from Loews said Friday. “Guests with reservations at Sapphire Falls or Aventura will be accommodated at our other hotels.”

These cutbacks come only a few weeks after Universal Orlando announced they would be temporarily closing several of their theme park attractions in both Universal’s Islands of Adventure and Universal Studios Florida.

“As we continue to evaluate our offerings during this phase of our reopening, we’re decided to focus on our marquee guest experiences,” a Universal Orlando spokesperson said in an email to Spectrum News regarding the closures of the attractions.

This news came following the announcement that the resort also planned to adjust its operating hours. Beginning August 2, Universal’s Islands of Adventure is now open from 10 a.m. to 6 p.m. Universal Studios Florida is open from 9 a.m. to 5 p.m. In this change, the company eliminated an hour from each park’s normal operating hours.

What are your thoughts on Universal Orlando temporarily closing these two resort hotels? Let us know in the comments!