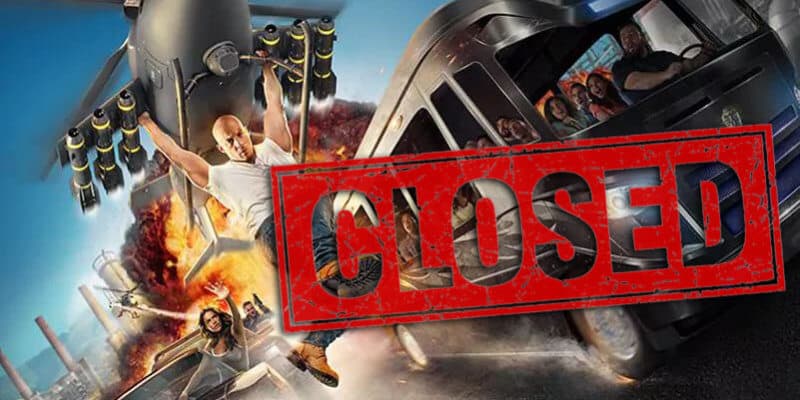 Due to the recent pandemic, Universal’s Islands of Adventure and Universal Studios is reported to be temporarily closing several of its attractions during daily operations.

According to a new report by Spectrum News 13, beginning August 9, A Day in the Park with Barney, Fast & Furious: Supercharged, Kang & Kudos’ Twirl ‘n’ Hurl, and Fear Factor Live at Universal Studios Florida will all be closing temporarily. At Islands of Adventure, Storm Force Accelatron will also be closing as part of this new initiative by the theme park resort.

“As we continue to evaluate our offerings during this phase of our reopening, we’re decided to focus on our marquee guest experiences,” a Universal Orlando spokesperson said in an email to Spectrum News.

This news comes following the announcement that the resort also plans to adjust its operating hours. Starting August 2, Universal’s Islands of Adventure will be open only from 10 a.m. to 6 p.m. Universal Studios Florida will be open from 9 a.m. to 5 p.m.

Prior to this change, both parks were open from 9 a.m. to 6 p.m. At this time, Universal has not adjusted the times of its entertainment shopping center, CityWalk.

As we previously shared, Universal Orlando first reopened to park guests in June with the addition of new health precautions in an attempt to stop the spread of the current COVID-19 pandemic. Some of these new precautions include all guests having to wear face masks, and undergo temperature screenings.

Guests with temperatures over 100.4 will not be permitted into the parks. Additionally, the theme park resort installed social distancing markers on the floors of queues and outside of entertainment areas as a means to keep guests 6 feet apart at all times.

What are your thoughts of Universal Orlando temporarily closing several of its attractions due to the recent pandemic? Let us know in the comments!

Comments Off on Universal Orlando Will Temporarily Close Several Attractions