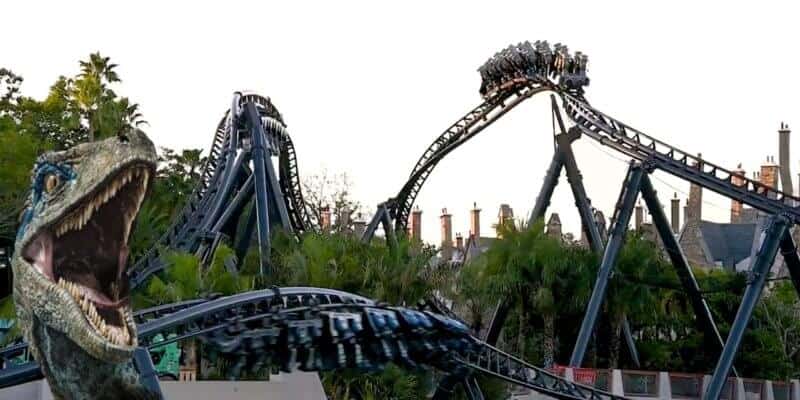 If you are just as excited as we are here at Inside the Magic for Universal’s VelociCoaster, then you likely are counting down the days until summer 2021. Now, we have reason to believe that VelociCoaster could have the fastest moving coaster line at Universal Orlando!

The VelociCoaster has been testing quite often at this point — With only one show building being touched up in terms of what we can see from the exterior of this coaster, it really seems ready for a velociraptor run. Now, thanks to The Orlando Perspective’s edit (@OrlPerspective) we can see the VelociCoaster running at least three coaster vehicles at the same time! If this is possible, it would certainly be a game-changer.

They shared the video below along with the caption:

Whether or not this will happen once the ride is fully operational has not been confirmed yet (and, considering that we found out since publishing this article that this is just a fan edit, that means it may not be possible). But, if VelociCoaster can operate this way, it does point to a few possibilities.

One reason I believe this wouldn’t be possible once the coaster is up and running is because of the loading and off-loading time that it takes to put guests on and off the coaster. If three coasters are running at the same time, it could cause long wait times for those being stuck on the coaster once it’s over as they wait for the coaster in front of them to finish loading. However, there is a way to fix this possible problem and that is with time.

Many coasters have one ride vehicle loading while another runs, but to have three would mean you need a moment that the coaster stalls. VelociCoaster is meant to be a story-telling coaster, and if Hagrid’s Motorbike Adventure is any evidence as to how well Universal can tell a story on a coaster, we are in luck! Why? Well because that means the coaster could have show scenes!

With two show buildings, many animatronics in the making, and holograms of Chris Pratt and the rest of the Jurassic World team being anticipated, we need to have a place to watch them. Although VelociCoaster will crack top speeds, it may use these show buildings to slow down, add to the story, have something happen, and then pick back up. If this does indeed happen, that would increase the ride time which is great for riders but also would help create a seamless transition between three different ride coasters.

Plus, if this video is what will actually happen, that means we will speed past other riders as we are on our velociraptor run, which gives us some major Duelling Dragon vibes.

Do you think Universal will run three coasters on VelociCoaster?