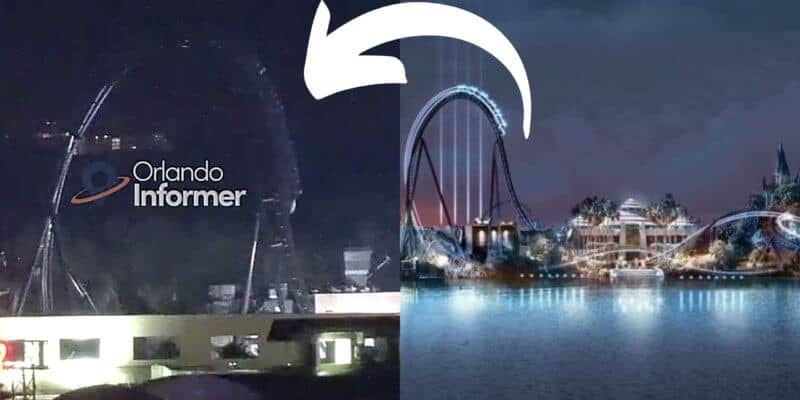 If you are as excited as all of us at Inside The Magic for Universal’s upcoming VelociCoaster, get ready to freak out. Since we received the news of the VelociCoaster being the official name of Universal’s Islands of Adventure Jurassic Park franchise themed coaster, construction has ramped up significantly. The roller coaster began pull-through testing, rock work is really taking shape, and were able to see the official Universal VelociCoaster trailer which gave us our first real look into what this beast was going to look like.

There are going to be incredible thrills on this coaster like a dive spiral, two launches, and most exciting of all, a 155-foot drop that peaks high enough for all of Islands of Adventure to be seen. The blue lighting on the inGen ride vehicle is expected to zoom by so fast we will only see the lighting flash by at night as we ride along with the velociraptors of Jurassic World.

What if we told you that 1550-foot epic drop was tested at full speed last night? Thanks to Orlando Informer we were able to catch a full video of the VelociCoaster testing the giant drop and this time it wasn’t a pull through. The coaster launches right over the drop and I could already feel my stomach turn from my couch at home. The speed at which we can see the coaster move at will give us a moment of literal gravity defiance as riders will (safely) lift off their seats and be held down by the lap bar.

(PRE)HISTORIC NEWS: early this morning, the Jurassic World VelociCoaster ride vehicle was launched over the attraction’s 155-foot-tall hill for the first time ever. pic.twitter.com/Jq4taiBHnK

This is the first time the VelociCoaster has undergone a full speed test, which presumably means the pull through testing has been going very well. It has only been a few weeks since we even saw a coaster hit the tracks at Universal Orlando, so to see the VelociCoaster in action is very exciting and promising for it’s 2021 release.

The only thing that would have made this test run better would have been for the blue VelociCoaster lights to be turned on. Since this was a night test, Universal was likely not trying to draw too much attention. Having a bight blue LED light zip by on their tallest coaster may have been a little more eye catching, so we understand why the lighting was not in full effect.

Stay tuned to ITM as we continue to travel back to the prehistoric dinosaur era of Jurassic World and stay on top of the VelociCoaster’s progress!

How excited did this video of the drop make you? Let us know!