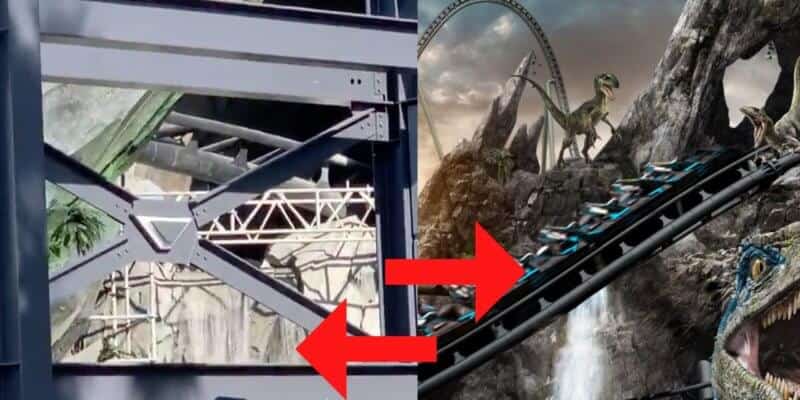 It seems that every day, a new update for Universal’s VelociCoaster appears, and it makes the anticipation for this new attraction grow even stronger. Since the opening announcement — in which we discovered not only the name of the coaster (no longer needing to deem it “Jurassic Coaster”), but also a Summer 2021 opening date, and a Jurassic World based IP storyline — construction has picked up immensely.

We are going to take a look at a few new additions to Universal’s Islands of Adventure VelociCoaster, but the most exciting sneak peak is that this roller coaster will have a water feature.

Details are beginning to take shape after Universal Orlando released the VelociCoaster teaser trailer where we can see how the theming could look on the attraction. Knowing what the style of the rock work will be has been very exciting because we can now look at construction updated of the jagged and terrifying looking landscape and understand what the end goal is from the renderings Universal created.

Something we do not see in the teaser trailer for the Universal coaster is a waterfall, but we do see one in the official VelociCoaster image. Orlando Informer took to Twitter to say:

They also shared a video of a waterfall running through the dinosaur fence enclosure. Take a look below!

Don't go chasing waterfalls… unless they're part of the Jurassic World VelociCoaster. pic.twitter.com/WFZZodg2Ju

Could this get you wet?

The waterfall that has been constructed into the VelociCoaster runs alongside rock work, and does not look like it reaches a far distance. With the track not being directly next to the waterfall feature, it is unlikely that you will get soaked on this attraction. After watching this video, the waterfall seems to have a purpose of creating heightened theming and immersion for the rider, with the crashing sounds of the water.

We know that the coaster will have audio playing on the ride vehicle as it goes, so adding natural nature elements is only going to heighten the immersion that we are expecting on this coaster, even though it is outdoors. It will be interesting to see how Universal is able to mix environmental noises with velociraptor screams blasting through our inGen ride vehicles. Sounds like the waterfall are so minimal we may not be able to pick up on it in the moment as we ride, but overall it will cater to the believability that we are in a prehistoric land in the wild where dinosaurs exist.

There has been further additions than just the waterfall on VelociCoaster. Twitter user @bioreconstruct has given us an in-depth look at both, so let’s take a look at what is new, and what it could mean for the coaster.

In the below @bioreconstruct tweet, we can see that lighting has been added on top of the Jurassic World VelociCoaster fence enclosure. The interesting thing here is that from first glance, they lights seem oddly broken with numerous fractures, but the caption helps clear that up:

Close looks at some of the Dinosaur fence lighting of Jurassic World VelociCoaster. Each clear end has a unique set of fractures. Could be to have multiple colors, or to have the light refract and disperse.

Close looks at some of the Dinosaur fence lighting of Jurassic World VelociCoaster. Each clear end has a unique set of fractures. Could be to have multiple colors, or to have the light refract and disperse. pic.twitter.com/4iMlVV0Ckf

We already know that the led blue lights from the ride vehicle are going to produce stunning visuals, especially at night when the coaster is reach high speeds on both of it’s launches, so it makes sense that Unviersal may be wanting to create a stunning visual of this new coaster.

VelociCoaster is visible from so many points of Islands of Adventure that it will be important to make sure that all guests who walk by are in awe, and that it is not just an attraction but a work of art. If this clear, fractured lighting can help produce dynamic colors and shapes for the overall exterior view of the coaster, that will only make more park goers want to ride.

Netting that is nearly invisible to a camera is up in this portion of Jurassic Park VelociCoaster. pic.twitter.com/KDWECXrenT

@bioreconstruct also added photos of netting on VelociCoaster that are almost invisible to the eye. A quick glance at the above photo may not make you think there is a net on this coaster, but there is. The netting is likely added due to the high-speed nature of the roller coaster, which means that riders may lose things on their velociraptor run. Netting is a great tool to help catch objects that may fall, and help cushion their landing. Although you don’t want to have your phone fall out of your pocket on a roller coaster, it is nice to know if it does it may not directly hit the ground!

Stay tuned to ITM as we continue to follow this beast of a coaster to completion.

Are you excited for VelociCoaster? Let us know!

Comments Off on VIDEO: Ride Past Waterfalls On Universal’s VelociCoaster