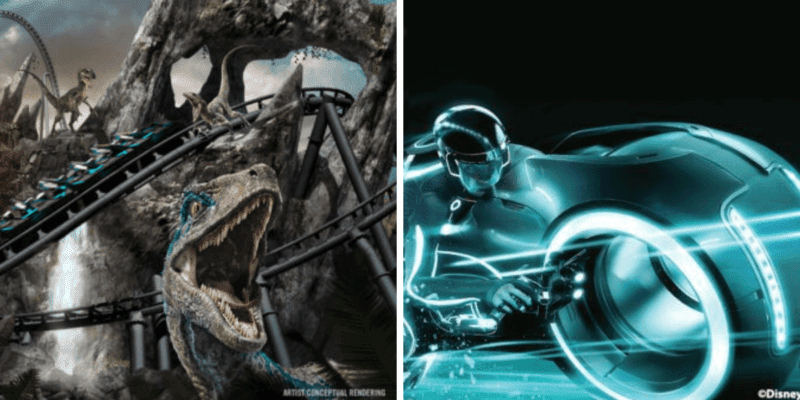 In 2021, two of the most anticipated coasters in recent theme park history will be unveiled —  TRON Lightcycle Power Run at Walt Disney World and the Jurassic World: VelociCoaster at Universal Orlando Resort.

Both attractions are expected to bring in large crowds of people, but which coaster is going to come out on top?

To form our prediction, we are going to compare IPs, the coaster set-up itself, and the overall anticipation for the ride.

This is a pretty easy comparison. Jurassic World and the entire Jurassic Park franchise is one of the biggest, most well-known, and most profitable known today. And this has made the sinister dinosaur, the velociraptor, one of the most beloved and feared movie creatures of all time.

TRON, on the other hand, is a rather obscure Disney franchise. Adopting more of a cult following, the first film (1982) made huge advancements in computer animation for its time, telling a compelling story of a man’s adventures on “The Grid.” The sequel (2010) then built upon that, using modern-day technology as well as a Daft Punk soundtrack. While the films were able to earn some money, and a third installment is reportedly on the way, it is a much smaller franchise than its competition.

In other words, what is the casual movie fan going to be more excited to do? Go on a crazy run with velociraptors or speed through “The Grid” on a lightcycle vehicle?

Now, let’s look at the coasters. VelociCoaster looks far more thrilling in a traditional coaster sense with massive drops and inversions. Those brave enough to hop aboard will also be in the mix with those velociraptors and other dinosaurs, and take off on a hair-raising adventure hitting a top speed of 70 mph and a height of 155 feet in the air.

TRON, on the other hand, appears to have a far milder track. No inversions or super-steep drops. But, what TRON seems to come out ahead with is its level of immersion and speed. Rather than sitting in a redesigned, but still traditional coaster train, Guests are strapped to a lightcycle — the motorcycle-like vehicles that are one of the most memorable parts of the franchise. They are then launched onto the grid on the fastest roller coaster in Disney Parks history, and “The Grid” promises to be visually spectacular.

There is another aspect that we should consider. The VelociCoaster is a completely original new addition to Universal’s Islands of Adventure. TRON will be a copy of the coaster at Shanghai Disneyland. This dissonance could go either way. Those who have been unable to go to Shanghai to ride this Tomorrowland staple could be building-up anticipation knowing that the Disney World copy will now give them the chance to finally experience it. Contrarily, the thrill of trying something entirely new could draw people to the VelociCoaster instead.

This was the deciding factor for some of us here at Inside the Magic. While they loved TRON, some of our writers who experienced the attraction in Shanghai are now focused on the newer of the two coasters.

But, TRON might have a little help coming out on top in 2021. It is set to be opened for Walt Disney World Resort’s 50th Anniversary Celebration. With that Golden Anniversary already bringing Guests into the parks — once the celebrations are announced and are able to begin, that is — there is reason to believe more people are going to choose to experience TRON: Lightcycle Power Run while there.

With no other special events planned at Universal Orlando Resort, the pressure to bring in guests rests solely on the launch of the VelociCoaster.

Which are the fans more excited for?

While we can speculate all we want, we want to know which coaster you, the fans and would-be Guests, are more excited to experience.

We have a poll running right now on our Instagram story, and we want to hear from you. At the time this article is being published, 78% say they are more excited for TRON with 22% saying they’re more excited for VelociCoaster almost 400 people have already participated in the poll.

Our friends at Academy Travel are standing by ready to help you plan your next trip to Universal or Disney World so you can be one of the first Guests to take on these amazing roller coasters! Click here to learn more and receive your free, no-obligation quote today!

Why are you more excited for TRON or VelociCoaster? Let us know in the comments!

Comments Off on Popularity Contest – TRON or VelociCoaster?