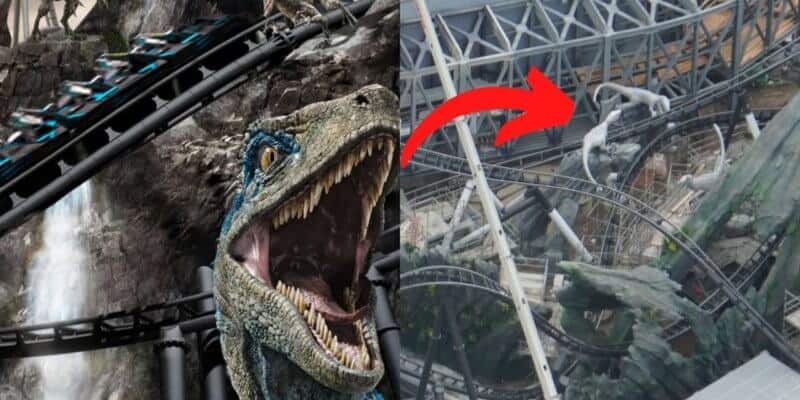 Another day. Another VelociCoaster update. If you are new to the VelociCoaster construction journey, welcome! The newly confirmed VelociCoaster (previously know as Jurassic Coaster) is the newest coaster to be built by Universal Orlando. Universal’s Islands of Adventure theme park will be home to this zero-gravity, pulse-pounding 70 mph launch, new specie coaster and construction is ramping up quickly!

What we know about Universal’s VelicoCoaster

VelociCoaster is going to take us through a highly dangerous run with velociraptors, and who knows what we may encounter throughout the way. With hatched dinosaur eggs already in sight on the coasters exterior, we never know what new dinosaur could be lurking behind each new spiral or launch.

This new coaster complements the established ‘Raptor Encounter’ experience, further adding the Jurassic World storyline to Universal’s Islands of Adventure. According to Universal “Guests will join the original cast of the films – Chris Pratt as Owen Grady, Bryce Dallas Howard as Claire Dearing and BD Wong as Dr. Henry Wu – as Jurassic World unveils the next evolution of its “carnivore expansion”: the VelociCoaster”. This will be Florida’s fastest and tallest launch coaster, but the Universal Creative team is making sure it is highly immersive as well.

If you have seen the VelociCoaster teaser trailers, you know that there is prehistoric rock work at every turn, and we can already see that rock work coming to life. A few days ago we reported on the dive spiral undergoing testing, as well as took a look as the rock works progress, which is looking exactly like the trailers’ renderings.

A few weeks ago, we saw images of a dinosaur being airlifted into the VelociCoaster track site. Now, thanks to Bioreconstruct’s ariel photos on Twitter, we can see there is not one, but four dinos in this attraction! Considering rock work is still underway, having so many ‘characters’ be inserted during a heavy construction period is very exciting and telling as to how much detail and immersion this coaster is likely to offer.

The dinosaurs are currently plastic wrapped, but we can see that three have been placed together around a part of the coaster’s track, likely hinting that us riders are going to be in a tricky situation at that point of the rollercoasters journey.

We do not yet know if these dinosaurs will be animatronics, but I am personally speculating that the coaster will have sound effects that will have us jumping in our ride vehicle whether they are moving or not.

With the VelociCoaster set to debut at Universal Orlando in Summer 2021, having so many dinosaurs already in place leaves us hopeful that they will be adding many more. With 2 vacant buildings also attached to the track, the possibilities of showrooms, and more visual sights are endless.

ITM will be tracking this coaster every step of the way, so stay tuned to hear the next update!

Are you excited for VelociCoaster? Let us know!

Comments Off on Take A Peek: First 4 Dinosaurs Added to ‘VelociCoaster’