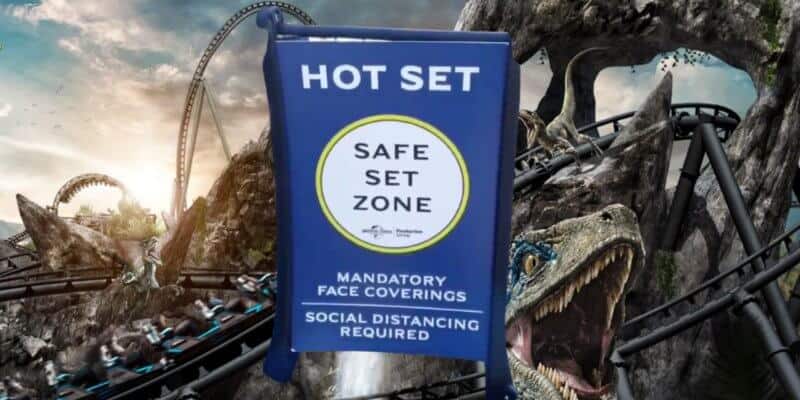 Universal’s VelociCoaster is giving it’s future guests and riders lots of excitement lately with the constant leaps towards completion. And now, it looks like VelociCoaster is getting ready for her big debut because it’s been nothing but lights, camera, action for the coaster earlier this week!

We have known for the past few days that getting close to the VelociCoaster was a thing of the past. The bridge many photographers use to keep track and get good angles of the Islands of Adventure attraction closed down, and now we understand why. As of Tuesday, it seems that filming had been going on on the exterior and possibly interior of the VelociCoaster. The timing of this makes sense as Universal unveiled the padlock gates by taking down a portion of the construction gates recently to keep the hype train going.

Thanks to Midway Mayhem (@Midway_Mayhem) took to Twitter to share a short clip of what filming has been looking like at VelociCoaster. We can see that the filming is directly in front of the coaster making it hard to believe that this could be anything else but a commercial for VelociCoaster. There is also a white screen right in front of the gate, which to me, looks like the perfect background that can also be used as a green screen for whoever is voicing the spot.

Why film a commercial?

With Universal’s VelociCoaster opening in summer 2021, getting families to book a vacation to anticipate riding the beast and technological advancement for roller coasters everywhere. In order for anyone to feel inclined to buy a vacation, showing the fun and excitement and all there is to see and do is going to always be your #1 line of attack, and it seems Universal is doing just that.

With the major financial loss, Universal Orlando Resort has faced due to the pandemic, it will be important for Universal to regain some of their lost funds in 2021. Universal has even been dropping hints like anticipating when they will begin to break ground on the Wizarding World of Harry Potter attraction, and now with this, there is no doubt that Universal is using the major players at Universal Studios and Islands of Adventure to pull back their audience as well as attract a new crowd back into the park in 2021.

I personally am totally fine with any sneak peek of Jurassic World’s VeclociCoaster, so until it’s released I will just be here patiently waiting to jump back to a prehistoric time with you all.

Comments Off on Filming Is Taking Place at Universal’s VelociCoaster