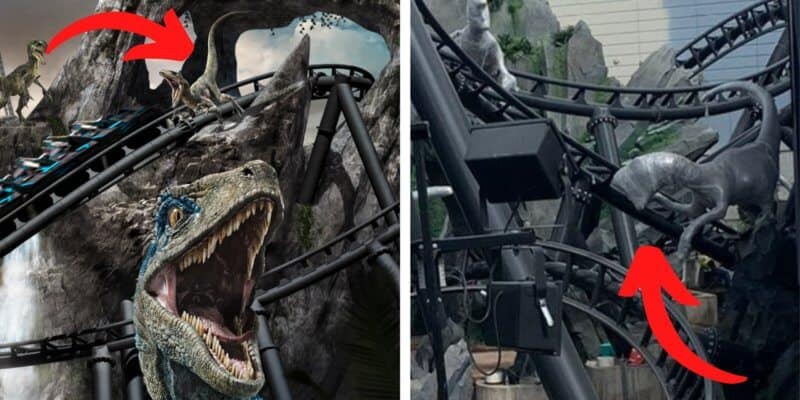 It’s been a quick minute since we have taken a look at Universal Orlando’s VelociCoaster, and lots of work has been done!

If you have been following Inside the Magic’s reporting on the construction updates for the new Jurassic World themed coaster: VelociCoaster, you know it’s moving at a quick pace. It seems that every day there is something new being added to the attraction from jagged rockwork to waterfalls to dinosaurs, we’re already immersed in the world the attraction is creating.

Recently we reported that VelociCoaster underwent a full speed test over the giant drop, which is what is making each construction update and addition so exciting at this point because the finish line is in sight. Of course, Universal has already announced that this Island’s of Adventure roller coaster will not take us back to the prehistoric period until summer 2021, but with this progress, the attraction itself will likely be ready before then.

Today, we are going to take a look and some new landscaping, dinosaur animatronics, and fencing, because it seems that Universal is trying to correct a sightline issue that could ruin the immersive feel of the Wizarding World of Harry Potter.

Over the past week, we have been seeing photos surface of lots more trees being added to VelociCoaster. Of course, this could likely be for immersive purposes, considering the location that VelociCoaster takes place is directly in the wild. But if we look closely, we can see that the area that is being heavily canopied is directly in front of Hogsmeade.

Thanks to bioreconstruct, we can see how Universal is trying to create this separation.

Considering you can already see directly into the Wizarding World of Harry Potter when you ride the attraction, it looks like Universal is trying to do something to separate the dinosaurs from the wizards. Line of sight is not a huge issue when it comes to Universal Orlando Resort, many attractions can be seen from various lands, and VelociCoaster will be no exception. The attraction rides to 155 ft and will be seen from many locations at the theme park, but considering the proximity to the Wizarding World, it is smart to separate the two worlds as much as they can.

Trees next to the dinosaur fence of Jurassic World VelociCoaster. pic.twitter.com/uzD488AO27

We already knew that there were 4 raptors placed in the attraction at this time, but now Alicia Stella has posted a closer look. As you can see below, the dinosaur is directly next to the track with what looks to be a big black speaker box nearby. Since the attraction will have sound operating, and looking at the proximity of that dinosaur to the track, it looks like this is going to be a jump scare moment.

Of course, the dinosaur can move at any time and not be so close to the track, but as it stands — it looks like this will be a very up close and personal meet with the raptor.

View of VelociCoaster from Pteranodon Flyers. Look at them wraptors. Thanks to @bmehlrose1 for the pics! pic.twitter.com/5zxsDMyEvR

New fencing has also been, as we can see from bioreonstruct’s photo. Although the area in which we see the fencing takes place directly in the field and space of the coaster, Universal must add a safety fence there considering the ledge of the ground leads into the lagoon.

Fencing starting to be placed along the Jurassic World VelociCoaster waterfront. pic.twitter.com/4xE2miq5A3

We will continue to follow this amazing coasters construction through to it’s first ride, and if you want to know all things VelociCoaster, sign up below to our mailing list! News letters will come to you daily with all the Disney and Universal news you need to know, so sign up today to become an Insider.

What part of VelociCoaster are you most excited for?