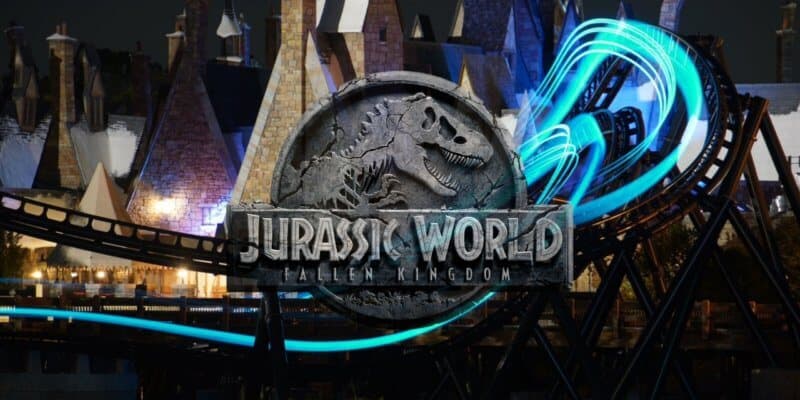 Universal’s VelociCoaster is moving so fast, it might even get to summer 2021 before we do!

In summer 2021, Universal’s Islands of Adventure is set to debut what is arguably its biggest thrill coaster to date, VelociCoaster. Following the Jurassic World IP, riders are going to have the opportunity to join Chris Pratt — although how exactly the actor will appear in the attraction has not been confirmed — as we hop on a velociraptor and go on a run. Riders should not expect to have a slow-moving journey through the padlock encounter!

Bioreconstruct (@bioreconstruct) took to Twitter to show a long exposure photo of the VelociCoaster passing through some of the curves on the coaster tracks with the lights whipping by.

The blue light that the coaster glows with matches that of the newly revealed velociraptors that riders will meet during their encounter.  Considering this coaster is seemingly meant to resemble a velociraptor, which again has not been officially confirmed by Universal officials, blue lighting on the ride vehicles could make them look all the more like Blue from the Jurassic World franchise!

The 155-foot drop coaster is confirmed to feature 12 airtime moments, a 100-foot long zero-G stall, and a barrel roll over the lagoon, creating a jaw-dropping skyline at Islands of Adventure. The coaster will also have speakers built into the ride vehicles so that riders will be deeply immersed in the prehistoric world, presumably with dinosaur sounds and roars taking over their eardrums.

Universal is currently stepping up their hype game for the coaster as guests patiently await an official opening date. Considering the coaster has been testing quite frequently at this point, this Universal fan is hoping that an opening date will be announced shortly.

Stay tuned to Inside the Magic for all news regarding Universal Orlando Resort’s VelociCoaster!

Do you think that the VelociCoaster will be Universal’s best attraction yet? Let us know your thoughts!

Comments Off on Universal’s VelociCoaster Lights the Night Sky Blue