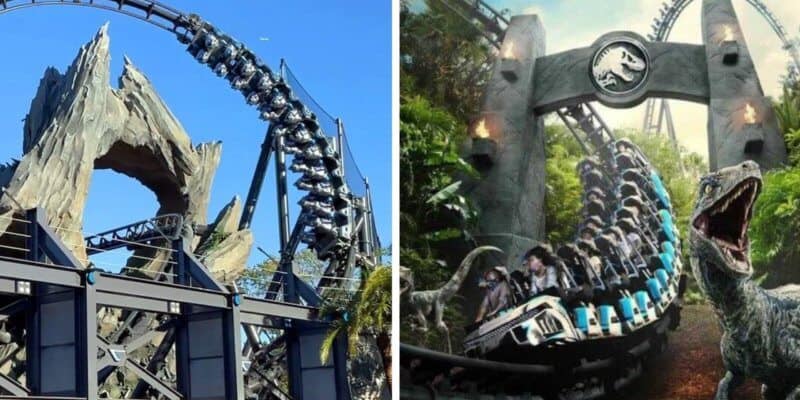 Universal’s VelociCoaster is the resort’s biggest attraction that will roar to life in summer 2021. The Jurassic World coaster will have riders running alongside a carnivorous pack of velociraptors while roars blast into their ears and giant dinosaurs pop around sharp turns.

From what we have seen on social media, the VelociCoaster looks like it will be a very smooth running coaster, and although the coaster is partially indoor with its two show buildings, the majority of the track is outside.

The new thrill coaster coming to Universal’s Islands of Adventure is highly anticipated by all, including this reporter, but like any other outdoor Orlando theme park attraction, VelociCoaster could succumb to weather.

When people think of Florida weather, typically heat is what comes to mind. Being from Canada, I know I personally associate the vacation location with strong suns and palm trees. And aside from assuring you are covered in sunscreen before a long day at Universal Orlando — the heat won’t affect your ride on the VelociCoaster. It may even give the rider some relief as the air whips past them!

Florida also undergoes high wind storms, hurricanes, tropical storms with lightning, and at times, albeit rare, near-freezing weather conditions that could all affect the run of this new coaster.

High winds do not affect all roller coasters, but it is always a possibility. Luckily, Florida does not experience high winds consistently, but it does occur from time to time.

Universal Studios has seen high winds affect one of their major coasters in the past, Rip Ride Rockit. While the coaster was testing during high winds, it was reported that the coaster underwent a brake run failure due to the existing weather conditions.

On many coasters, brake runs are in place to slow or even stop the train of a roller coaster. These are sections of the roller coaster track with forms of braking that can adjust the train’s speed and ensure that the coaster is operating smoothly. Brake runs also allow the coaster to extend its run time which allows for a smoother loading transition for the second coaster at the loading dock. The added time produced by brake runs gives guests more time to load without another coaster waiting behind for extended amounts of time.

However, the “top hat” or crest of the coaster’s hill function differently and have different brake systems in place. It is possible that, if high winds were to affect the safety of VelociCoaster on a given day, Universal may decide to close the ride. That being said, although high wind conditions can prevent a roller coaster from reaching a high hill and even slow it down, this is not something that should be a concern when riders are on the coaster, since Universal would close the attraction if this was an anticipated issue. Considering VelociCoaster is going to be the most up-to-date coaster at the theme park, we’ll have to wait and see if winds would pose an issue to the coaster in the long run.

Cold temperatures in Florida? No way!

Even in the sunshine state, Florida does have a few days in the year that get quite cold, which can affect the coasters in the theme parks. If you look at theme parks around the globe, many often close during winter months due to freezing temperatures and snow, and that is because it is tough for attractions to function around the freezing mark.

On a chilly Orlando day, Universal’s The Incredible Hulk coaster had to shut down due to the cold. As explained by park fan Brian R. Sanderson, near-freezing or freezing temperatures can affect a ride vehicle’s performance.

At below-zero temperatures, ice or frost rime on the rails would seriously alter several factors on which the ride’s performance has been calculated. Also: the industrial lubricants (grease on the lift hill drive and in the coaster car wheel bearings) tend to solidify at temperatures near freezing. That brings us to…

Near freezing temperatures: in addition to the lubricants freezing up, the polyurethane compounds used in some coaster car wheels can get brittle in colder temperatures. Running the ride when the coaster wheels are too cold can cause splits and cracks in the wheels.

Other factors associated with colder weather: Some modern rides employ light sensitive sensors to time the coasting and braking cycles on the cars. Those sensors sometimes “fog up” in colder weather, rendering them unable to “see” the passing cars. This usually trips an alarm flag in the control system and shuts the ride down.

Again, to experience temperatures like this in Florida is not common, but could happen every once in a while during the cold winter months. Whether or not VelociCoaster will succumb to cold temperatures is something that we will need to wait to confirm, considering the coaster will open during the hottest time of the year!

Although freezing weather and high winds may not be too common in Florida, storms are extremely common and during the summer months, with rain showers occurring almost daily. Accuweather reports, “On average, Florida has 3,500 clouds to ground lightning flashes per day and 1.2 million flashes per year occur.” Unfortunately, outdoor attractions such as VelcociCoaster are prone to lightning strikes, so Universal does need to shut down rides like roller coasters when lightning is in the area.

According to one Reddit user, Universal’s outdoor attractions must shut down “if lightning is measured within 10 miles of the park, and they stay closed for 30 minutes unless another strike occurs in that radius (then they start the clock over).” I used to also work in a theme park that underwent a similar protocol with outdoor attractions, as well.

Universal Orlando also stated on a Trip Advisor forum that, “Our outdoor attractions will close if there is inclement weather in the area. However, many of our attractions are indoors. If you have any additional questions please feel free to call our Guest Services Department at 407-224-4233 option 4.”

Knowing how roller coasters are designed with the safety of the rider in mind — and that Orlando often faces storms that can impact attraction operations — it makes sense for Universal Orlando Resort to be considering all possibilities.

As a reminder, Universal Orlando Resort always prioritizes guest safety, and if inclement weather ever led to concerns of the coaster not working properly, the coaster would be temporarily closed and guests would not be able to ride. We have seen this happen with other Universal attractions in the past. Considering VelociCoaster is going to be a state-of-the-art, new coaster, safety will likely be of the highest quality!

Stay tuned to Inside the Magic as we continue to report on Universal’s VelociCoaster as opening day approaches.

Are you planning on riding VelociCoaster in 2021? Let us know below!

We can help you plan the perfect vacation to Universal Orlando Resort! Click here for more information