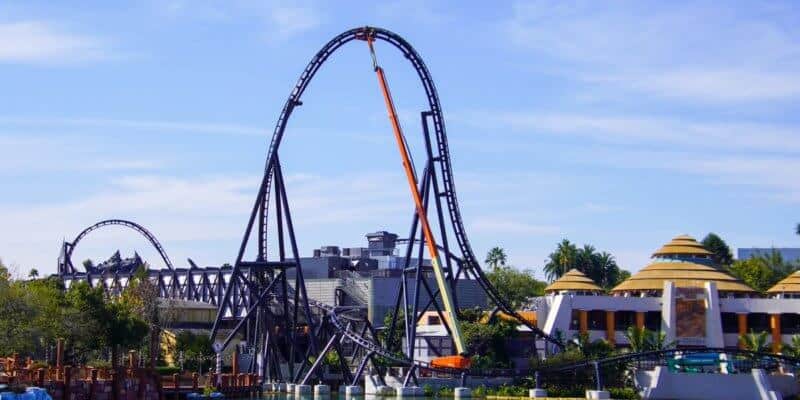 Often, when it comes to Universal coasters, problems arise due to harsh winds, tropical storms, and at times, even frigid weather — but Universal’s VelociCoaster is facing another problem entirely.

If you follow Bioreconstruct (@bioreconstruct) on Twitter, you have likely seen many sightings of the illustrious osprey sitting atop Universal’s latest coaster, VelociCoaster, which will be roaring to life in Summer 2021. That being said, the coaster seems to have taken a resident who has constantly proven that it does not want to leave.

As we can see below, a giant crane has once again been erected to clear out the most recent osprey nest that has been constructed on the peak of the Jurassic World VelociCoaster.

The osprey to which the nest belongs constantly continues to rebuild its nest in the same spot, even when Universal removes it time and time again. As we can see in Bioreconstruct’s photos below, the ospreys have once again returned with their sticks, forcing Universal officials to have to climb to the top of the 150-foot drop to clear it out. Unfortunately for Universal, if past trends continue, the ospreys will likely return with more sticks tomorrow.

Osprey returns to top of Jurassic World VelociCoaster. Flies away. Brings branch to start the next nest. pic.twitter.com/yXlNREzkCK

Considering the VelociCoaster is currently in its testing phase, having a clear track — especially during one of the most dangerous parts of the ride — is quite important. Plus, if I were Universal, I wouldn’t want the guilt of possibly running over an innocent bird on my conscience. Unfortunately, making sure this happens is clearly causing construction delays for the Universal team.

That being said, this is clearly an ongoing problem that Universal has yet to solve — but how will they deal with the constant delay after the attraction is opened?

For now, it is likely that the osprey is finding its home on the VelociCoaster peak simply because it can. The coaster may be undergoing test runs, but it does not run often, leaving a rather stationary and undisturbed peak for the bird to nest on.

Once the attraction is consistently running, it will be less likely that the osprey will try to make a home on the track, since they will see the danger the coaster poses. However, considering how the osprey has become so used to the VelociCoaster, it wouldn’t be surprising to see a nest go up in the evenings while the coaster is quiet during the first few days after opening.

Currently, we do not have a specific opening date for the coaster at Universal’s Islands of Adventure, but Universal is now beginning to push the promotion for the attraction which leads us to believe that date may follow the hype train soon. Most recently we have seen new photos of the sleek coaster which will hold 24 daring riders as they run alongside carnivorous velociraptors.

Stay tuned to Inside the Magic for all of your VelociCoaster updates!

Do you think that the returning osprey will pose an issue for the VelociCoaster once it opens?