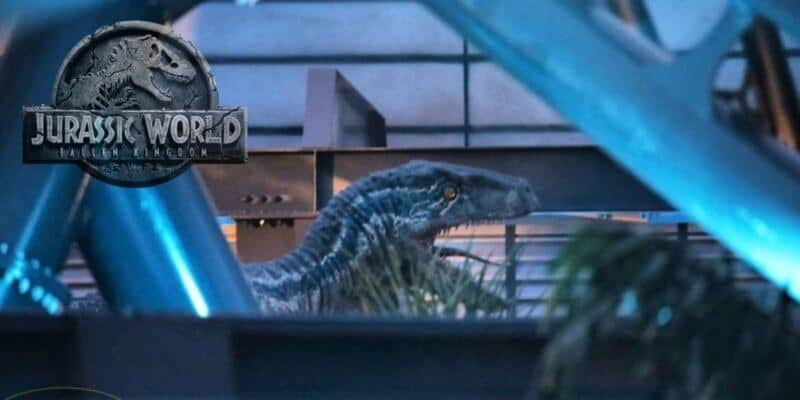 As we edge closer to Universal’s opening date for their latest thrill-coaster, VelociCoaster, discovering new information and sneak peeks about the attraction has become even more exciting. Now, we get to take a look at the carnivorous velociraptors we will soon meet in summer 2021 at Universal’s Islands of Adventure.

The VelociCoaster will be an intense high-speed coaster that can hit up to 70 MPH on its velociraptor run. The 155-foot drop coaster is confirmed to feature 12 airtime moments, a 100-foot long zero-G stall, and a barrel roll over the lagoon — if your stomach is already dropping in excitement, so it ours!

Jurassic World will be the IP behind the coaster using characters from the film — such as Chris Pratt — in the attraction. However, how they will be used has yet to be announced. The storyline of the attraction is that riders will take part in a velociraptor run in the gated padlock, but from the looks of the attraction, it seems that things will go awry. We were able to see that four velociraptor figures had been placed in the exterior section of the coaster, but they are now unwrapped for the first time!

Midway Mayhem (@midwaymayhem) took to Instagram to showcase a photo of an unwrapped velociraptor on the attraction’s ride track and it looks terrifying. As we can see, the velociraptor matches the one used in the promotional material and concept art, using blue streams down its back for an even scarier finish — just like Blue from Jurassic World 2 (2018)!

I spy with my eyes something……BLUE! Blue has been unwrapped at construction site for the Universal Orlando Resort’s new Jurassic World VelociCoaster and she looks fantastic! We also caught crews testing the ride again from several different angles!

Interestingly, the blue streaks on the back of the velociraptor match the blue lights that streak down the back of the coaster. It seems that the coaster itself may also be acting like a velociraptor, meaning when we board the VelociCoaster, we too become a dinosaur on the run. This is, of course, speculation at this point and the full storyline has not been revealed.

At the moment, it is unclear if these dinosaurs are statues, or if we should expect them to move as animatronics. Regardless of that fact, they still look very terrifying and will surely cause a reason to scream when they pop up around the corner of an attraction.

Stay tuned for all things VelociCoaster as Inside the Magic continues to report all the details as we approach the roaring debut!

If you want to be at Universal Orlando when VelociCoaster opens, you need to book a vacation! Click here to get started today.