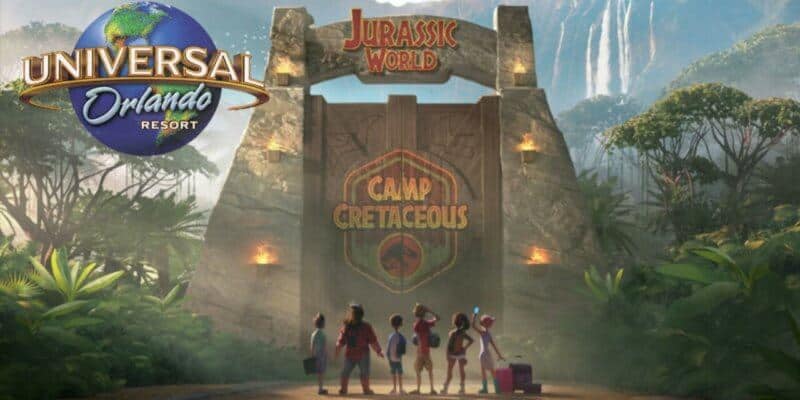 It is no surprise that Universal is hyping their newest coaster, VelociCoaster, which will open in summer 2021. Not only is it a new attraction, but it builds on the Jurassic World IP, which Universal is using to propel guests into the Chris Pratt franchise, as opposed to solely staying in the realm of the 1990s Jurassic Park IP. That being said, will Universal Orlando resort stop with Jurassic World after VelociCoaster is released?

The official synopsis of the hit animated series reads:

“Set against the timeline of the blockbuster film Jurassic World, Jurassic World: Camp Cretaceous follows a group of six teenagers trapped at a new adventure camp on the opposite side of Isla Nublar. When the events of the film unfold and dinosaurs are unleashed across the island, each kid realizes their very survival rests on the shoulders of themselves and their fellow campers. Unable to reach the outside world, our six teens will go from strangers to friends to family as they band together to survive the dinosaurs and uncover hidden secrets so deep they threaten the world itself.”

Although this sounds like the perfect plot of a Jurassic World canon series, it also sounds like what guests at a Universal theme park could theoretically be told in the pre-show of a ride. Similar to Disney’s Hollywood Studios attraction Millennium Falcon: Smugglers Run at Star Wars: Galaxy’s Edge, a Jurassic World attraction where a group of riders must band together to survive would be pretty interesting. Plus, the opportunity to have a Gyrosphere act as a ride vehicle is one I am begging Universal to not pass up!

Considering the show is produced by Steven Spielberg, a Universal legend, and is already being slated to have a Season 3, the show is not only well-made but clearly well-received. The excitement Universal fans are currently feeling for VelociCoaster could be something Universal could build upon in its theme parks by not just using the films, but the show as well.

Although Epic Universe already has all of its lands rumored, it would be interesting to see a Jurassic World land fully created where guests can explore Isla Nublar for themselves and ride attractions from both the film and the show, considering they exist in the same universe and timeline.

This has not been confirmed by Universal, and at this point, is purely speculation. However, the likely success of VelociCoaster could be the convincing Universal needs to really take a deep dive into a Jurassic World land — which would only give the films and show more popularity and recognition.

Currently, Jurassic World and Jurassic Park IPs exist within the same area at Universal’s Islands of Adventure at Universal Orlando Resort. To create a detailed land such as The Wizarding World of Harry Potter, however, is something Universal has not done, but very well could in the future.

Do you think that Universal should create a fully detailed and immersive Jurassic World land?