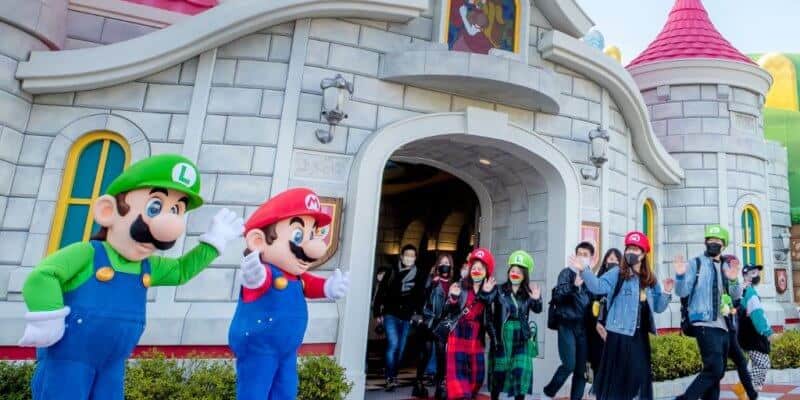 There is so much to talk about when it comes to Super Nintendo World. So we are going to break it up into mushroom-sized bites for you! The land holds two brand-new attractions, themed dining and treats, interactive elements, and more.

Let’s start at the very beginning, in order to enter into the Super Nintendo World land expansion at Universal Studios Japan you will have to go through a Warp Pipe. OF COURSE! This first unique detail truly sets the bar for the rest of the land as it is so highly themed and immersive — it truly will be like stepping right into your favorite Mario game!

What sound effects and lighting will accompany the entrance to Super Nintendo World?

The Warp Pipe entrance to Super Nintendo World will feature the classic sound effects from the Mario franchise with lights zooming all around you, and when you finally reach the end of the pipe, the land will be revealed to you! After you walk through the warp pipe be sure to look behind you to get a great look at Princess Peach’s Castle!

What makes the entrance to Super Nintendo World so unique?

This is the part of Super Nintendo World that everyone has been waiting for. Mario Kart: Koopa’s Challenge will bring Guests through various memorable Mario Kart courses right out of the video game. You will attempt to win the Universal Cup while you throw shells and try not to spin out on Rainbow Road.

What kind of ride will Mario Kart: Koopa’s Challenge be?

While Mario Kart: Koopa’s Challenge is a thrilling attraction, it is not a thrill ride. The attraction does not move quickly, it utilizes augmented reality to immerse the riders in the world of Mario via special Mario glasses all Guests wear when they ride.

The ride is perfect for anyone in your family who loves Mario though there is a height requirement. If your child is 107 cm they have to ride with an adult, to ride without an adult riders need to be at least 122 cm tall.

Here is how Universal describes this attraction:

You will also get to enter Bowser’s castle for the queue of this attraction, which is a course many Mario Kart players have experienced in the Mario Kart game — but now you get to walk through it!

Yoshi’s Adventure will be a family attraction that is both fun and colorful.

Hang on to Yoshi as you search for Captain Toad on a treasure hunt! Get a spectacular view of the Mushroom Kingdom from Mount Beanpole while having fun on this ride that’s perfect for the whole family.

What type of ride is Yoshi’s Adventure?

Part of this attraction will be uncovered and visible throughout the land bringing life and vibrancy to Super Nintendo World — and adding to the general atmosphere. This is a family-friendly attraction featuring many different colorful Yoshis that take you on a slow-moving adventure around the skies of Super Nintendo World.

You will not only get great views of Super Nintendo World when you ride Yoshi’s Adventure, you will also see some amazing animatronics!

What ages will enjoy the attractions at Super Nintendo World?

Essentially between Mario Kart: Koopa’s Challenge and Yoshi’s Adventure all ages can enjoy both attractions at Super Nintendo World, although there are minor height requirements.

After a race on the Mario Kart attraction, you might find yourself famished. Thankfully Universal has you covered! You can find some Mario themed fare to help you gain 1up at the Konopio’s Café prepared by Chef Toad himself:

Indulge in fun gourmet dishes crafted by Chef Toad.
Enjoy beautiful views of the Mushroom Kingdom from the windows.

What will be offered at Kinopio’s Café?

There is a ton of adorable food at Kinopio’s Café including a Mario-themed burger, Super Mushroom Pizza Bowl with Mushroom Tomato Sauce, Pirahna Plant Caprese, Block Tiramisu, and my favorite, the Princess Peach Cake that is made to share.

There are more than enough options for everyone in your party to find something they like after a long day of riding Mario Kart: Koopa’s Challenge.

What will the view be like at Kinopio’s Café?

While you dine at Kinopio’s Café you will have views of Super Nintendo World.

What Yoshi-themed snacks will be available at Super Nintendo World?

You can grab a Yoshi shell filled with yakisoba noodle and cheese, or if your thirsty two themed beverages are also sold. See photos here!

How much do the Power-Up Bands cost at Super Nintendo World?

The entire land can be your digital playground with a little help of a Power-Up Band. These innovative new brands are available for purchase for about $30 USD and link to the Universal app.

How do the Power-Up Bands at Super Nintendo World work?

You can use Power-Up bands at various touchpoints around Super Nintendo World to interact with both physical and digital elements. For example, you can hit a “?” block in the real world but collect digital coins in the app.

Universal describes the Power-Up Bands as:

How will you be able to interact with Super Nintendo World through the Power-Up Bands?

Want to see more of Super Nintendo World? Learn how you can take a virtual tour of the land here!

Here is what Universal had to say about the Donkey Kong expansion in a recent press release:

To further immerse guests into Nintendo’s well-known series of games, Universal Studios Japan will expand the land to include a new area themed after Donkey Kong. The new area will bring to life the world of one of Nintendo’s most beloved games and feature a roller coaster, interactive experiences, themed merchandise and food – and all the fun and excitement of SUPER NINTENDO WORLD. Guests will feel like they are playing inside the world of Donkey Kong as they take a walk on the wild side through the lush jungles where Donkey Kong and his friends live. The new area is set to open in 2024.

Nintendo’s Donkey Kong franchise started with an arcade game in 1981 and quickly captured the hearts of fans around the world. Since then, the Donkey Kong game series has continually delivered more games on Nintendo video game systems, such as the Super Nintendo Entertainment System, Wii, and Nintendo Switch. The series has sold over 65 million units (as of March 2021) worldwide to generations of fans.

The Universal creative team and the Nintendo creative team — including Shigeru Miyamoto, the creator of Super Mario — will bring the new Donkey Kong themed area to life. The area will be a gamechanger that combines the innovative technology and globally popular approach to theme park entertainment of Universal with the creativity of Nintendo. With the addition of the Donkey Kong area, SUPER NINTENDO WORLD at Universal Studios Japan will increase in size by approximately 70%.

Work has already begun on Donkey Kong and we will continue to monitor its progress as it inches closer to its debut in 2024. You can check out the Donkey Kong construction here.

If you cannot make it to Japan do not worry! Universal has confirmed that Super Nintendo World will be coming to Universal Orlando Resort, Universal Studios Hollywood, and Universal Studios Singapore. We have a breakdown of the differences we expect to see when each land opens.

Construction has restarted on Epic Universe which is the newest theme park coming the Universal Orlando Resort. Epic Universe will be the home of Super Nintendo World in Orlando.

The collaboration between Universal and Nintendo does not seem to be stopping at theme parks. Recently, Nintendo just announced an animated Super Mario Bros. film starring Chris Pratt as Mario, that will be created with Illuminations. Illuminations is the animation studio owned by NBCUniversal that is responsible for films such as Despicable Me, Minions, and more.

Check out all of the major stars that will be featured in the Super Mario Bros. movie here!

Are you looking forward to visiting Super Nintendo World? Let us know in the comments!

We can help you plan the perfect trip to any of Universal’s world-class theme park resorts — click here for more information.