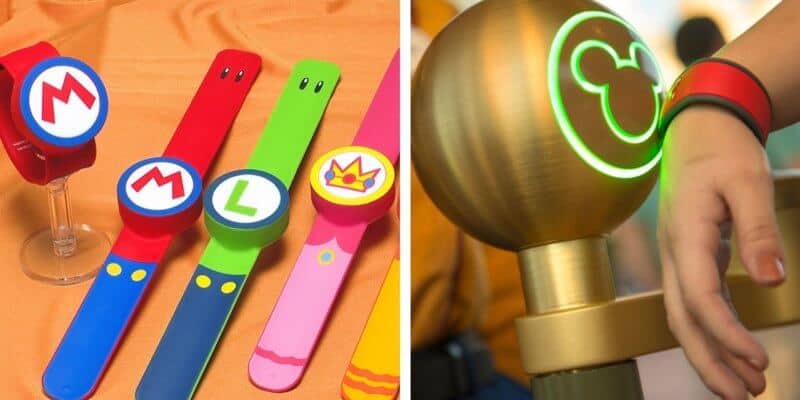 One of the most exciting things about booking your Disney vacation is getting to pick the color or design that you want for your MagicBand, which until 2021, were free!

Unfortunately, this perk will no longer exist in the new year as Disney begins charging between $5-$20 per MagicBand. But while Disney shifts their focus away from wristband wear, Universal is unveiling all of the perks their new Power-Up Band creates.

As we have reported and discussed, Disney will no longer be providing free MagicBands when you book a Disney vacation at a Disney Resort. In fact, it really seems like they are pulling away from the idea of the MagicBand all together to create a streamlined form of access to all things needed on your Disney vacation, being your cell phone.

Although you can still purchase a MagicBand or use an old one, Disney is offering a Key to the World card that would have ticket access as well as room access on it, as well as the My Disney Experience app, which has check-in features on it and can also work as your room key.

With all of that being accessible on your phone, as well as having the ability to use Apple Pay or Mobile Order on the My Disney Experience App, the need for a MagicBand doesn’t seem as necessary unless you are using it as an accessory.

That being said, Universal has stepped in with the Power-Up Band for Super Nintendo World that is also stylish and highly interactive with the ability to completely upgrade your theme park experience.

This is not Universal’s first look at an interactive wristband for guests, as they also have the TapuTapu band that you can use at Volcano Bay. This allows guests to enter virtual queues instead of waiting in them, take interactive photos, as well as pay with a tap. Since this has all been done successfully, the Power-Up Band is looking to take things to the next level allowing you to interact with Super Nintendo World and basically play as a Nintendo character in a real-life arena, with all of your data and success being tracked back to your phone. Creating an in-park experience like no other, much like the interactive wands at the Wizarding World of Harry Potter.

At the moment, it seems the Power-Up Band will be for play and not have practical tap and pay elements on it. However, since we know Universal is capable of creating the feature, it could always happen in the future. Although the Power Up Bands will also cost money, much like Disney’s MagicBand, it will have more of a purpose and functionality considering that playing all of the land’s activities can only exclusively happen with a Power-Up Band, and all of the functions of a MagicBand can be used through your cell phone.

At the moment, with Super Nintendo World opening in Universal Japan, the competition for families or visitors to choose between buying a MagicBand or Power-Up Band (if they don’t want to purchase both) is not that strong. But, Super Nintendo World is set to be a land opening in Epic Universe. Once the Power-Up Bands are introduced in the Florida theme park industry, it would be understandable to see people gravitate towards the newer and more useful Power-Up Bands.

Would you purchase a Power-Up Band or a MagicBand, if you only had one option?