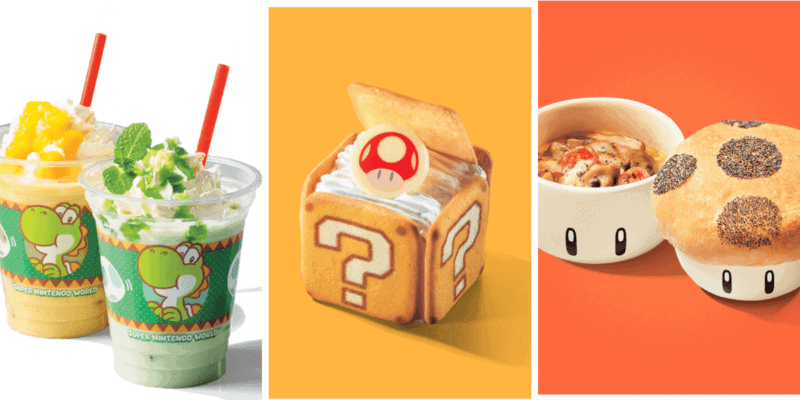 Now that the park is getting so close to its opening date, many of the delicious treats have been revealed to fans! They are all, of course, highly themed to Super Nintendo World and will make any Mario fan a hungry Goomba just by looking at the photos.

Here is our first look thanks to a tweet by Orlando Informer. Their post includes a photo of a calzone filled with yakisoba and cheese in the shape of a green shell. Additionally, they show two drinks that are themed to Yoshi! Now, this combo looks like the perfect snack to refill your tank after a ride on the Mario Kart attraction!

These snacks will be available at a grab and go location called YoshiSnack Island. This location will be near the exit of the Yoshi attraction.

Related: When Will Universal’s Mario Kart Attraction Open in the U.S?

Snack alert! We’ll be craving Yoshi's Snack Island for the rest of the night. The #SuperNintendoWorld menu includes…

If the Yoshi themed snacks were not enough for you, check this out! Kinopio’s Cafe is packed with highly themed treats and dishes to help level up your experience at Super Nintendo World!

Related: You Can Virtually Tour Super Nintendo World Before it Opens

Pizza, cheeseburgers, a caprese salad, and tiramisu will be available at the quick service style restaurant within the land. The tiramisu that looks like a question block, complete with mushroom on top is the perfect Instagram treat for your visit to Super Nintendo World!

Chef Toad cooked up an incredible menu for Kinopio’s Cafe in #SuperNintendoWorld! What do you want to try first?

What snacks are you looking forward to trying the most when Super Nintendo World opens on February 4? Let us know in the comments!

Want to plan a trip for the grand opening of Super Nintendo World at Universal Studios Japan? We can help with that! Click here for more information!

Comments Off on Super Nintendo World Snacks Will Help You Level Up!