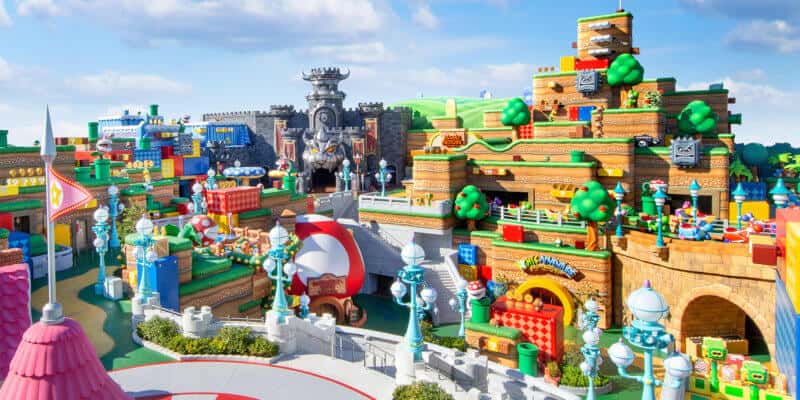 Super Nintendo World is set to open on February 4 at Universal Japan and many Nintendo fans can barely contain their excitement. Universal has already been quite generous in the videos that have been released about the land — and now, they have given us another taste of what the land will look like.

If we take a look at the Super Nintendo World website, it allows viewers to tour the land electronically. The site begins the way the new land will, with a Warp Pipe. When you use a Warp Pipe in a Super Mario game, you can go to secret areas of the game, so by having the Warp Pipe be the official entrance into the land, guests gets to feel as if they are truly being transported from one land (reality) and into another (Super Nintendo World).

The first swipe will take you to Bowser’s castle. Once guests enter this land, they will be able to enter Bowser’s castle as this is where a portion of the queue for Koopa’s Challenge will take place, as well as act as the introduction to the attraction.

The attraction will have 3D elements as you ride and, with the glasses accompanying a hat, it looks like we will all be playing as Mario in this attraction. Universal recently released more information on the attraction:

On each page of the site, you can click the arrow of the character that appears on the bottom right hand of the screen to learn more, or swipe up to move on.

With another swipe up, we can see Yoshi standing in front of his attraction. Yoshi’s Adventures has not yet been heavily covered by Universal Japan, so it will likely be more of a surprise attraction on February 4. We do know that this is a slower moving attraction from the site’s representation, but we can only be sure of what to expect once the land officially opens.

Baby Bowser is in the next section. Here we can see many Power Blocks and coins to be collected. Guests in the land will have the opportunity to purchase a Power-Up Band where they can interact with the land and play in ‘activities’ in which an eventual face-off with Bowser must occur. It looks like this section of the land will be highly interactive for those who wish to play.

We then head to Kinopio’s Cafe where Chef Toad will cook for us! This is the food location of the land which looks like it is going to have heavily themed meals that are delicious at the same time.

Next, we see Princess Peach! We will be able to see Princess Peach’s castle when we exit the Warp Pipe as we enter the land. In this case, however, we see she is standing in front of 1UP Factory, likely the gift shop of the land — who better than Princess Peach to introduce it to us!

Stay tuned to Inside the Magic as we continue to virtually cover the opening of Super Nintendo World on February 4!

Do you think this land will be more immersive than Universal’s past lands such as the Wizarding World of Harry Potter?