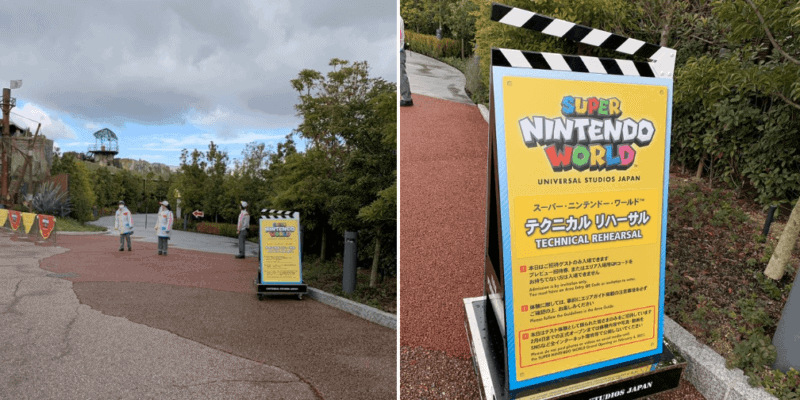 We have been receiving lots of new information on Universal Japan’s Super Nintendo World, which is opening in early 2021. Now, we can see that some select, very special guests have gained admission into the land for it’s technical rehearsal.

Thanks to @Bee_my_honeyyy on Twitter, someone who has likely has gained admission to the event, we can see that there is currently a technical rehearsal underway. The sign, although written in Japanese, also has English translation below. Basically, it seems Universal Japan requires three things of those who are entering Super Nintendo World for it’s “dress rehearsal”.

It seems that Universal is really controlling the media in terms of what is being released for Super Nintendo World. We have so far only seen media-approved information straight from the theme park, and it seems that is what we will continue to get until the official grand opening.

On the sign, we can see that their is a clapperboard which indicates that there will likely be filming at this technical rehearsal. Considering Universal is releasing video footage and tours of Super Nintendo World, the potential for filming could mean we will get another in-depth look of the new themed land.

One fun detail that has already been released is that visitors will enter the land as if they are a Nintendo character, such as Super Mario! Guests will pass through the green tunnel, enter Princess Peach’s castle, punch power-up blocks with the new Power-Up Bands, explore Bowser’s castle, race in their own versions of Super Mario Kart, solve an underground maze, and even eat a meal “cooked” by Toad! The colorful details of the land will make anyone who enters ready to play, which is the perfect mindset when entering a video game!

Currently, Universal Japan is the only Universal Park to have a Super Nintendo World land under construction. Universal Orlando has announced that Epic Universe will have the land — however, that park as a whole is currently at a standstill.

Stay tuned to Inside the Magic as we bring you all the latest updates on Super Nintendo World.

Do you think Super Nintendo World will be the best land Universal has ever created?