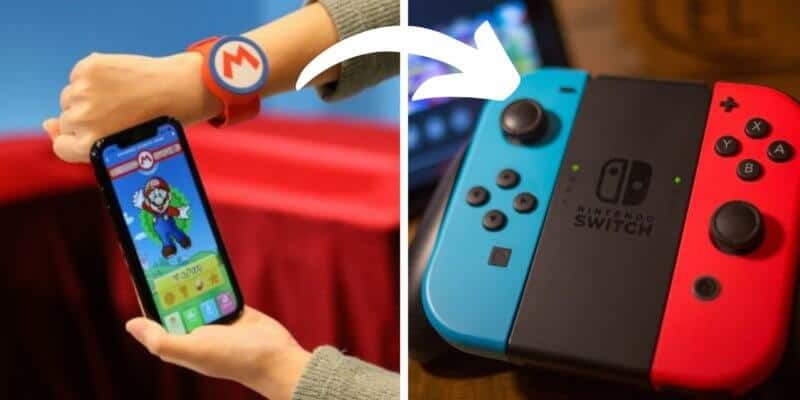 Super Nintendo World at Universal Japan is opening on February 4, 2021, and will have tons of innovative and immersive elements. The Power-Up Band is one of the many ways guests will be able to interact in the land and now you can bring that interaction home with your Nintendo Switch.

The Power-Up Band that Super Nintendo World will offer to its guests (for an unannounced fee) will be styled to reflect the looks of a variety of Nintendo characters, such as the classic Mario and Luigi — and many more. Guests in the land will be able to interact with different objects and complete activities within the land, in order to face off Bowser in a final activity. We have seen Universal successfully do this before with the interactive wands in the Wizarding World of Harry Potter, where guests can cast spells that magically alter things in the land. Now, the Power-Up Band takes things a few steps further as they connect to your phone to show all of your completed activities as you advance in the human version of a Nintendo game while at the park.

Universal has now offered another way you can keep the fun going when you are at home! The Power-Up Band also will connect to your Nintendo Switch and whatever character your band is meant to represent will appear on your screen as an ambiio. This will allow you to play Nintendo Switch games as the character that your Power-Up Band represents by just tapping it to the controller, as seen below.

Unfortunately, this capability is only for the Nintendo Switch at the moment, and you will need game software that supports the ambiio. However, for those with a Nintendo Switch, the incentive to purchase a Power-Up Band that will serve a purpose and allows you to continue playing even when you are not in Super Nintendo World is a great option!

Super Nintendo World is setting itself up to be a highly immersive land that you can not only fully connect to via the Power-Up Band, but also explore. The cartoon game world will allow guests to explore Princess Peach’s castle, Bowser’s castle, the classic world of Super Mario, jump into a game of Mario Kart, meet your favorite characters, and so much more.

At the moment, we know that Super Nintendo World is slated to be a land within Epic Universe in Orlando in the future. Currently, construction on Epic Universe is at a standstill, but after recent announcements, Universal officials have confirmed that the suspension is not a shutdown by any means.

If you want to visit Super Nintendo World in Universal Japan and purchase your Power-Up Band, click here to begin booking your Nintendo filled vacation today!

Would you want to purchase a Power-Up Band knowing all of its capabilities?