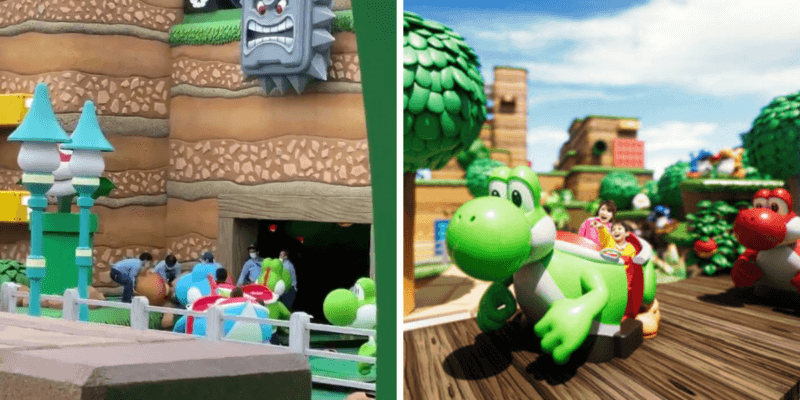 One prop that decorated the green mountains of Super Nintendo World fell off of its post and crash-landed onto Yoshi’s Adventure.

Super Nintendo World is a marvelous expansion to Universal Studios Japan. It is expertly themed and has animated props throughout the entire land. Many of these props can be found high on the mountain facade that the Yoshi’s Adventure attraction runs through.

Unfortunately, a stack of Goomba’s fell off of the mountain and down onto Yoshi’s Adventure. Guests were riding the attraction when this happened, and the aftermath was caught on video by a park Guest.

Thanks to a video by @tatata77747890 on Twitter we can see Universal Team Members attempting to move the Goomba’s. The Yoshi’s Adventure ride came to a stop, but Guests remained in their ride vehicles. Tatata went on to note that no one was injured and there was no damage to the attraction.

Yoshi’s Adventure is a slow-moving family attraction that takes riders on a pleasant trip high above Super Nintendo World. It is a stark contrast from the land’s other attraction, Mario Kart: Koopa’s Challenge.

Unfortunately, Universal has given fans little detail on what they can expect when Super Nintendo World opens at Universal Studios Hollywood. Meaning that all we can do is guess, and wait!

Currently, at Universal Studios Japan there is a construction project going on adjacent to Super Nintendo World. Could this be a rumored Donkey Kong expansion? Click here to read more.

Let us know what you think about the prop falling onto Yoshi’s Adventure in the comments!