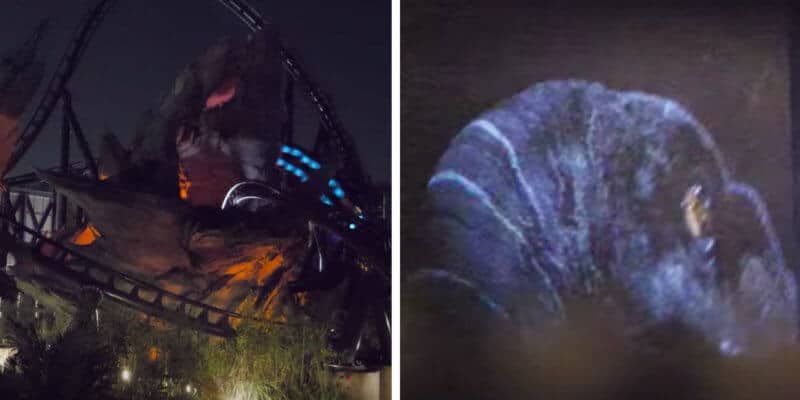 Universal’s VelociCoaster is one of the most highly anticipated attractions that thrill-seekers have been looking forward to riding. Universal Orlando Resort has truly stepped up when it comes to creating thrilling yet immersive attractions, as we have seen through the Wizarding World of Harry Potter, with every attraction being unique and detailed, while still giving Guests a reason to scream!

Now, with VelociCoaster opening at Universal’s Islands of Adventure in the Jurassic Park section, the Jurassic World IP has lent itself to help create what is set to be the most immersive coaster that Universal has ever created. From what we have been able to see so far, it is clear that the intricate rock work and velociraptor statues enclosed within the high-security raptor paddock will definitely give Guests a nervous feeling and sense of danger, but is that enough to be deemed Universal’s most immersive coaster?

Well, we can now see a sneak peek on what to expect when the attraction opens thanks to YouTuber Amusement Insider, and it seems that the coaster has a lot more to offer than what currently meets the eye. As we mentioned, VelociCoaster is closed off by paddocks, which makes it hard to see what happens within the gates of the attraction. This video, however, was able to showcase that 3-D screens will be used during the coasters run that have raptors running by as the coaster is in motion. It seems that the raptors are chasing the coaster, which is exactly the storyline of the attraction, but considering the screen goes red, it appears that the dinosaurs get pretty angry.

If you want to check out the video, which will give you a much better look at the screen use, you can watch it below.

Another fun aspect that we were able to see thanks to Amusement Insider is that the sides of the paddocks which are holding in the enclosed raptors have chains shaking on the exterior! This simulates the idea that those raptors are pushing to get out, which will really intensify the fear that the ride is meant to instill in riders.

Interestingly, Amusement Insider also noted this is the video description. :

Intamin is the manufacturer of the new roller coaster, the same as the new Hagrids Magical Creatures Motorbike Adventure ride located at the Wizarding World of Harry Potter. The family coaster is now accompanied by the massive Velocicoaster, 165 feet tall, 70mph, with 4 inversions, and 4 train operations.

Knowing that the same manufacturer as Hagrids Magical Creatures Motorbike Adventure created VelociCoaster only solidifies that the roller coaster will likely be the most immersive coaster that Universal Orlando has to offer!

So far, Universal has only confirmed that the attraction will open in the summer of 2021, but they have yet to announce a specific grand opening date. However, with Universal teasing an opening date on social media almost daily, this reporter is hopeful we will get an announcement in the very new future.

Do you like that VelociCoaster will be using screens? Let us know your thoughts in the comments below!

We can help you plan the perfect Universal Orlando Resort vacation, click here for more details.