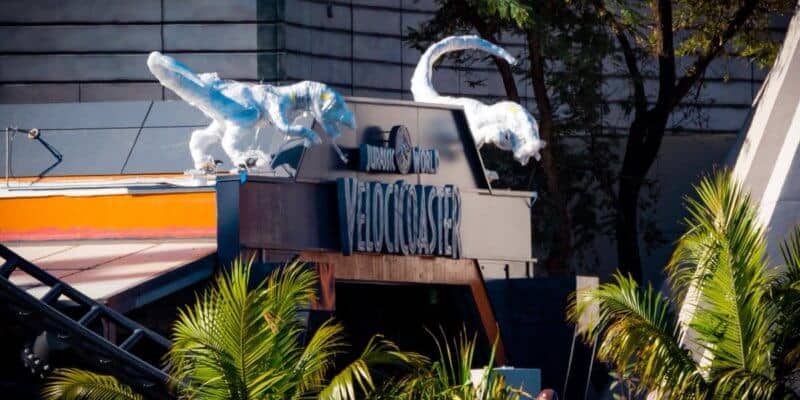 Universal’s VelociCoaster’s progress is speeding down the tracks towards the ride’s official grand opening!

Set to open in Summer 2021 at Universal’s Islands of Adventure, the Jurassic World IP coaster has been putting some finishing touches on the attraction.

Most recently we were able to see that more dinosaurs were added to both the ride track as well as the entryway of the queue. All of the dinosaurs are terrifying carnivorous velociraptors that look as if they are about to jump onto guests as they walk by. These blue streaked dinos only add to the immersive storytelling coaster feel that has been promised for the attraction.

No matter how jaw-dropping the sky-high paddocks and rigid rockwork may be, the entrance of any attraction is always one of the most important factors. When Guests are deciding if they want to ride, it is the entrance that will give them the final push they need to commit to the ride.

For VelociCoaster, the entrance needs to invoke a sense of fear into the rider, because the entire feeling of the attraction focuses on playing with Guests’ sense of danger. Not only will Guests go on a raptor run, but they will experience four inverted loops, giant drops, g-force, as well as Florida’s fastest launch on a coaster.

All of these specs give the ride a natural intense feel, but by adding a gated dinosaur camp, the story can play on Guests’ fear more so than the physical stomach-churning coaster track. Now, we can finally see the long-awaited VelociCoaster marquee — and it definitely sets the tone of the attraction.

Orlando Informer (@OrlandoInformer) posted a photo to Twitter of the two wrapped raptors guarding each side of the entrance sign which reads, “Jurassic World VelociCoaster” in the classic jagged Jurassic Park font.

FIRST LOOK: the Jurassic World VelociCoaster marquee is up! ? pic.twitter.com/K7T2gPxgid

In this photo, we can see that the entryway will be fully covered for Guests, which is perfect considering Orlando’s weather is prone to heavy rainfall. The queue will likely wrap into the first show building and loading platform, so an escape from the Florida heat may also accompany the queue.

Universal has done spectacular work within their queues at the Wizarding World of Harry Potter, re-creating an entire world and environment for riders, so, likely, VelociCoaster will also undergo the same immersive queue experience.

At the moment, we do not have an official opening date for VelociCoaster, but Universal has hinted at an announcement coming soon regarding the attractions opening date, so stay tuned to Inside the Magic as we continue to bring you everything VelociCoaster!

Do you think VelociCoaster will be Universal Orlando Resort’s best attraction once it opens?

Comments Off on VelociCoaster Takes Another Step Towards the Finish Line