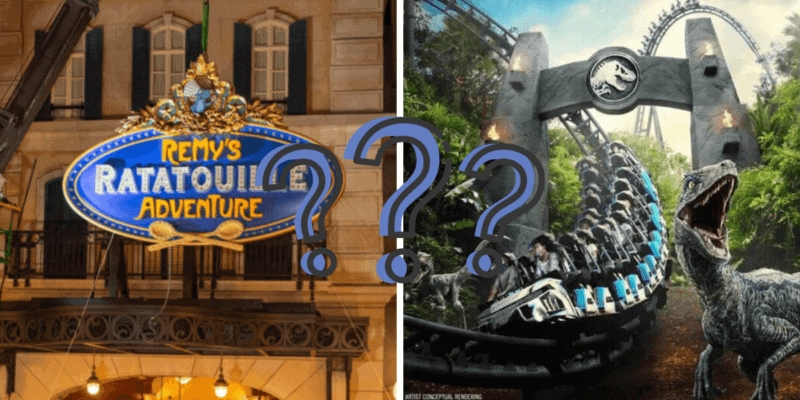 Both Walt Disney World Resort and Universal Orlando are close opening two brand new attractions at their Florida theme parks. But why have no concrete opening dates been announced for two attractions that appear to be nearly complete? Let’s discuss the challenges theme parks are facing in this pandemic-era world.

Walt Disney World recently opened a portion of their France pavilion expansion project in the EPCOT World Showcase. The France expansion includes a new courtyard, themed quick-service dining, new restrooms, and a brand new attraction, Remy’s Ratatouille Adventure. The portion of the expansion that Disney opened included the restrooms and a walkway leading to the courtyard that holds the Ratatouille-based attraction. From the outside, work appears to be complete on the area and presumably the attraction. Why have we not seen a concrete opening date?

Similarly, Universal has a brand new roller coaster, the Jurassic World-themed VelociCoaster, coming to their Islands of Adventure theme park this summer. Riders have been seen on the coaster as it continues testing, but still no set opening date has been announced. “Coming Soon This Summer” is vague when you consider it is almost February.

Theme parks face a truly difficult time as the pandemic continues into 2021. Is there a way to safely open new attractions to draw interest and bring visitors to the parks?

Both Disney and Universal have been committed to safety since they reopened last year. Strict face mask policies, social distancing protocols, and plenty of hand washing and hand sanitizing stations are placed throughout both theme park resorts. But opening a new attraction can be tricky as it is likely to draw large crowds. This happened, for example, when Universal opened Hagrid’s Magical Creatures Motorbike Adventure and Disney’s Hollywood Studios debuted Star Wars: Rise of the Resistance at Galaxy’s Edge.

While both theme park resorts are struggling to recoup serious monetary losses from 2020, new attractions could entice both travelers and locals to visit.

One way Disney and Universal could help their new attractions open safely would be to implement virtual queues. Disney uses a boarding group system for the popular Rise of Resistance attraction and it has been successful overall, though Disney is still trying to improve the system on a regular basis, such as by making changes to boarding pass distribution times.

Universal has virtual wait times at many attractions around their theme parks through their official app. So, it would not be a stretch to think that these parks could both utilize these existing virtual line features to help their attractions have a smooth grand opening process.

Until we have confirmation from Disney and Universal on opening dates for both VelociCoaster and Remy’s Ratatouille Adventure, both companies will likely play things close to the chest. It is possible that the opening dates for both attractions could be fluid behind the scenes as the pandemic continues and the theme park operators gauge when they can — and should — allow Guests to experience these new attractions for the first time .

So when do you think these new attraction will open? Let us know your thoughts in the comments!

We can help you plan the perfect vacation to Walt Disney World or Universal Orlando Resort! Click here for more details.