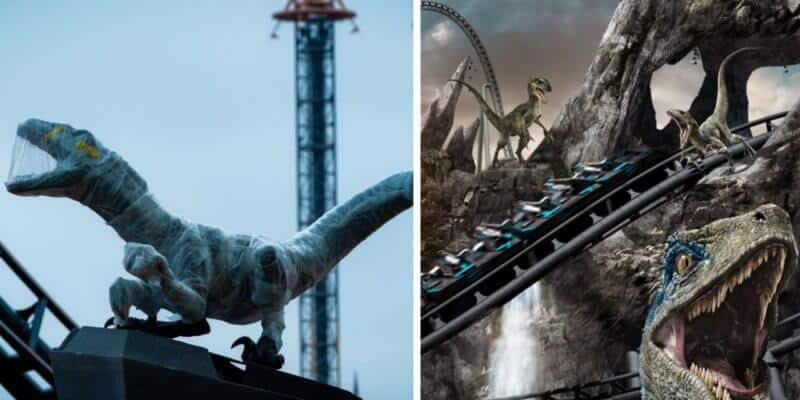 Universal Orlando is currently putting the finishing touches on its latest rollercoaster, VelociCoaster, and that means adding a raptor attack from the moment guests decide to ride.

VelociCoaster will be opening this summer 2021, at Universal’s Islands of Adventure. Thanks to the ongoing and rapid moving construction since the parks reopened in June, guests cannot wait to ride. VelociCoaster is not a typical coaster in the sense that it is purposefully made to not just be a thrill ride, but a highly immersive storytelling attraction. Therefore, as it has come to life, the excitement to explore it has exploded among Universal fans.

Now, just as we thought the exterior of the coaster was completed — Universal has added many more dinosaurs to the attraction. The interesting thing to note here is that these raptors are not necessarily in the attraction, but at the entrance.

If you have ever been to and Disney or Universal theme parks,  you know that the queues for their attractions take things one step above other theme parks because of their theming. Take Harry Potter and the Forbidden Journey in the Wizarding World of Harry Potter at Universal’s Islands of Adventure as the perfect example. Guests who choose to ride will get to literally enter Hogwarts and explore a multitude of the rooms from the films. The detail is so incredible that it is easy to assume the movies were literally filmed in the theme park.

Universal has proven that the newer the ride, the better the technology, and the more immersive and detail orientated the queue. That being said, VelociCoaster — a coaster Universal has said to be their most immersive yet — will likely follow the trend of having a queue that rips guests from their reality and places them in this one, a world where you are about to run with velociraptors. What can go wrong?

Well, that immersion is seemingly going to start from the moment guests enter the queue! Orlando Informer (@OrlandoInformer) took to Twitter to showcase the newest additions to the raptor family. As guests are walking towards the entrance of VelociCoaster, they will instantly be hit with what looks to be a roaring dinosaur. This angry raptor instantly sets the tone of the ride, reminding guests that these creatures are carnivorous and bloodthirsty.

Raptors are also standing guard alongside the path you'll take to enter the VelociCoaster queue. ? pic.twitter.com/XfFaIZmDtx

We can also see that another two dinos were added by the churro stand which guests will pass before riding as well. Instantly, the theory that we have noted in the past — which is that something will go wrong on the raptor run and the raptors will begin to attack the riders — feels a lot more accurate.

Every new raptor is constantly facing guests as they walk in with a very predatorial stance. It is clear Universal did not just want guests to see the raptors in their encounter, but rather, see the raptors staring directly back at us. The intention is quite menacing, and a perfect way to walk into the attraction.

Ok, maybe not that last one yet. pic.twitter.com/u7IqOCnOyd

Stay tuned to Inside the Magic as we continue to report on all things VelociCoaster as we run towards opening say!

Do you want to be at Universal Orlando this summer when VelociCoaster opens? Click here to get your adventure started today!

Do you think that VelociCoaster will be Universal’s most immersive ride yet?

Comments Off on Giant Dinosaurs Welcome Guests in VelociCoaster Queue