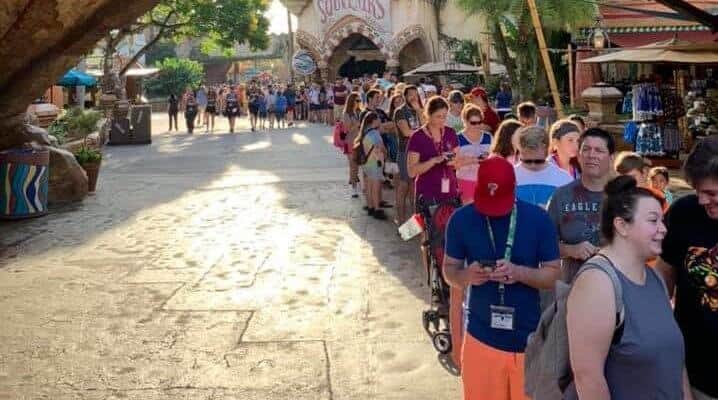 The opening of Hagrid’s Magical Creatures Motorbike Adventure at Universal’s Islands of Adventure has caused the park to be inundated by visitors eager to experience the new attraction. And according to users on the Universal Orlando Annual Passholder page, the wait time is up to 600 minutes (10 hours).

The post, shared by John Miller around 9:25 a.m. EST. on the private page reveals the extreme wait time. This was shared alongside other posts revealing the huge crowds that formed outside the park prior to opening and inside the park after guests were allowed inside. From the looks of these pictures, it’s a wonder if guests will actually make it on the ride today.

In a post by Joe Guglietti early this morning, we can see the large crowds already formed outside of the theme park prior to its opening, which didn’t happen until 9:00 a.m. This image was taken a few hours prior to that.

As one can imagine, most ride queues are not set up to accommodate 10 hours worth of guests waiting in line, which could explain this next image. In this image, posted by Saffron Lawrence, we see the line going almost to the park’s turnstiles.

The new attraction allows guests to journey through the Forbidden Forest with the help of Hagrid. During the experience, guests board a magical motorbike, which takes them on an adventure that features fantastic creatures from the “Harry Potter” films.

Some of these magical creatures featured in the attraction include a Blast-Ended Skrewt, Centaur, Devil’s Snare, Cornish Pixies, and Fluffy, the Three-Headed Dog.

For an in-depth look at the new attraction, be sure to see our special preview of the experience here.

Would you wait ten hours to experience Hagrid’s Magical Creatures Motorbike Adventure at Universal’s Islands of Adventure? Let us know in the comments below!