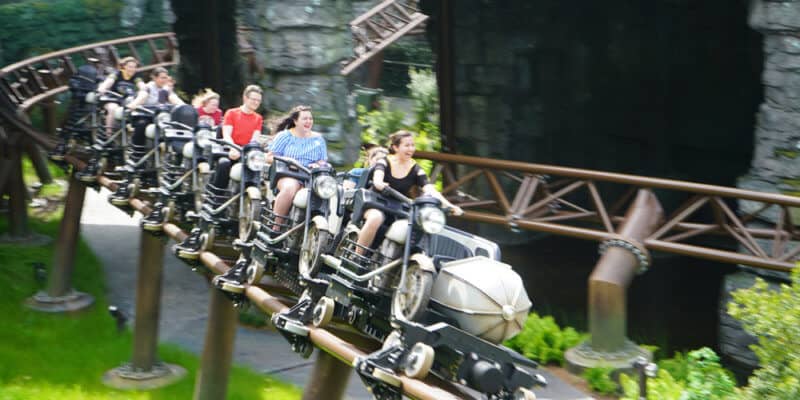 Hagrid’s Magical Creatures Motorbike Adventure is only a day away from opening at Universal’s Islands of Adventure and fans everywhere are already giving up for high-flying experience! Before you take on your own magical journey on the new ride, take a preview inside the new experience below.

The experience begins when guests first enter the queue. The entrance is the same from Dragon Challenge, the former attraction that used to reside in its new spot. However, it was reimagined and it now features some new elements.

As you begin your journey through the queue, you don’t get to see too many elements until about halfway through its exterior section, where you’ll encounter some large pumpkins, land keeping tools and Hagrid’s hut.

As you continue along the path you’ll make your way to a massive and rustic structure, which houses not only the rest of the queue but also part of the ride. Below is a look at the outside of the structure, which according to Gary Blumenstein, Creative Director for Hagrid’s Magical Creatures Motorbike Adventure, was designed in part by the Warner Bros. film team and Stuart Craig, the production designer behind the “Harry Potter” films.

Beyond these doors continues your journey inside. As you enter, you’re met with a small rounded hallway decorated with an array of themed elements hanging from the ceiling and Hagrid’s voice (voiced by Robbie Coltrane), telling you to “follow the path.”

After moving through corridors, guests are then stopped in a hall where they meet Hagrid and Arthur. Here, visitors experience a pre-show experience brought to life with digital projection and special effects starring Hagrid and Arthur Weasley, who welcomes you to the class and discusses what’s to come.

The video is similar to the one guests experience after getting off the lift in the queue of Harry Potter and the Escape from Gringotts at Universal Studios Florida.

Ultimately, this is where Hagrid tells visitors that guests are going to journey through the Forbidden Forest using the motorbike and that Arthur is there to help modify Serious Black’s motorbike and duplicate it to take you to the edge of the forest.

Once you move through here, you go through another themed hallway and a quarter where Hagrid has a collection of eggs.

Then guests move down into tunnels to “the chamber,” a room where Hagrid cross-bred a few different magical creatures to create Skrewts, which he grew and bred in the room. 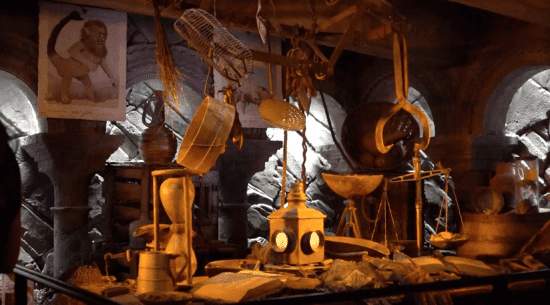 After walking through this area, guests are then taken through another series of chambers until coming out into one final themed room before hitting the loading platform.

The old cement room is dimly lit with flicking lanterns and a wood-paneled ceiling that features a special animated effect. When guests look up, they’ll see the outline of motorbikes and their sidecars flying in circles. As you continue to stand in this area, the effects change to large spiders crawling with flashes of orange and other colors.

Then, around the bend comes the magical moment, where guests get to step onto a moving platform that puts them onto the ride vehicle. Prior to approaching the platform, visitors are asked if they’re taking the sidecar or the motorbike. Depending on which you choose, ride operators will align you and your guest to quickly enter the vehicle so you’ll end up in your chosen vehicle. Guests are only able to enter the vehicle from one side.

Then you’re off to sail through the sky at 50 mph on a wild and magical adventure. From having experienced the attraction in both the sidecar and the motorbike, I can say my personal preference is the motorbike. The motorbike sits up higher and isn’t as enclosed as the sidecar. Due to the fact that you’re so high up in the air and are not surrounded by the ride vehicle, you really feel as if you’re flying through the air on a motorcycle.

The sidecar is also quite enjoyable. However, due to the fact that you’re so low down to the floor of the vehicle and are so enclosed in the cart, it makes the attraction seem more like a high-speed version of the Flight of the Hippogriff.

When the attraction takes off, it starts off quite slowly. For the parts of the attraction that feature an animated scene, the ride vehicles do slow down a bit. Although, there are a few scenes I wish the attraction would have moved slower for, including the Blast-Ended Skrewt and Fluffy. During the attraction, you’ll find yourself flying through the sky at 50 miles per hour and the feeling is exhilarating.

As for the “spike element,” where the ride ascends upwards into the sky, rolls backward and then accelerates at speed–this part of the experience is very high-speed and it almost feels as if you are actually falling backward out of the sky.

The animated scenes found throughout the attraction are really well done. One scene that really stands out from the rest includes Hagrid and a Blast-Ended Skrewt. Universal Creative really went above and beyond with this animatronic of Hagrid as it almost seems that it is a real, living and breathing version of the half-giant half-human gamekeeper.

Will you be heading over to Universal’s Islands of Adventure on Thursday, June 13 to ride the new attraction? Let us know in the comments below!

Comments Off on INSIDE Hagrid’s Magical Creatures Motorbike Adventure