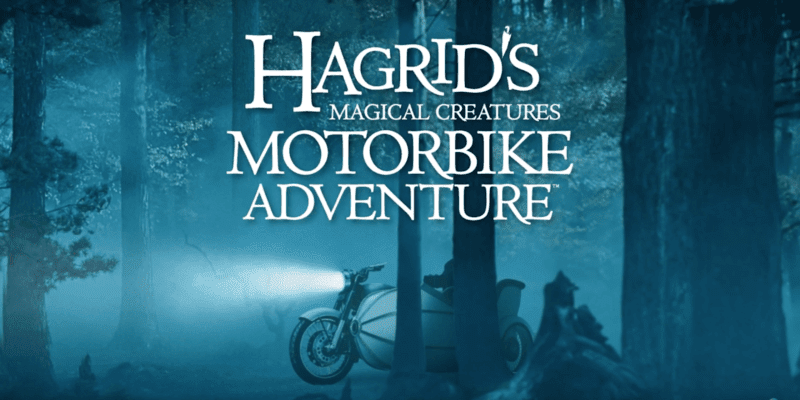 This new experience will let guests journey deep into the Forbidden Forest, one of the most dangerous places on all of Hogwarts grounds. But of course, visitors will be joined by Hagrid, who’s always felt at home there.

In this new experience, guests will join Hagrid as he guides you on a flight on his motorbike deep into the forest, where guests will brave the mysteries and thrills beyond the grounds of Hogwarts castle. Some of these thrills include coming across the world’s rarest magical creatures, such as a majestic Centaur, a swarm of mischievous Cornish Pixies, Fluffy, the three-headed dog – and even a creature that’s never been seen before in the films.

Challenging obstacles you’ll face along your journey include becoming entangled in a thicket of Devil’s Snare and more, all while encountering a few surprises along the way.

The attraction will be a freewheeling coaster flight where guests will get to twist, turn and rush forward and backward at speeds up to 50 mph into the dark forest.

According to Universal Orlando, this new attraction will combine a new level of storytelling and innovative coaster technology with rich environments and sets, including an actual forest with more than 1,200 live trees.

The experience will begin at Hagrid’s Care of Magical Creatures class, where guests will board magical motorbikes specifically designed to make them feel the freedom of flight. Guests will either ride the motorcycle or board the adjacent sidecar for what the “Harry Potter” film’s Art Director Alan Gilmore says will be a “different experience” that will bring guests closer to some of the wizarding world’s rarest magical creatures.

When it opens on June 13, 2019, Hagrid’s Magical Creatures Motorbike Adventure will join the lineup of award-winning entertainment experiences in The Wizarding World of Harry Potter and bring an all-new adventure inspired by J.K. Rowling’s beloved stories to life.

What are your thoughts on these new developments on Hagrid’s Magical Creatures Motorbike Adventure? Let us know in the comments below!